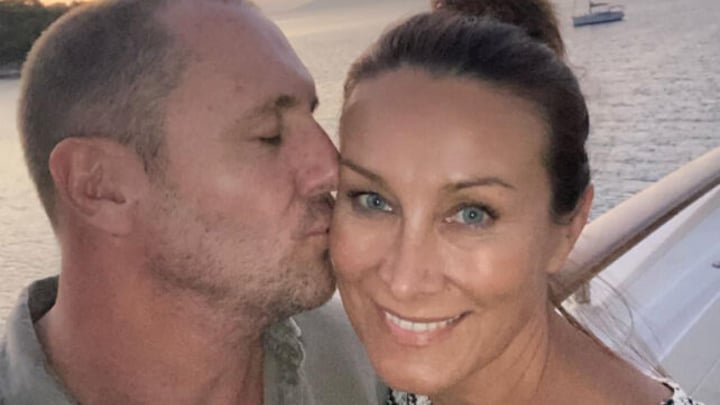 Larry Emdur has never been one to shy away from sharing his love for his wife on social media. Source: Instagram/ @larryemdur

Television personality Larry Emdur has delivered a heartwarming message to his wife in celebration of their 28th wedding anniversary.

The Morning Show co-host took to Instagram on Sunday, December 4 to share a loved up snap of him and his wife Sylvie alongside a caption where he professed his love for his partner.

“From the moment that sun comes up to the moment it goes down and every moment in between I adore you.

“The love and warmth and wisdom in those hypnotic magical blue eyes gets me through every day.

“I hope you let me kiss your cheek and smell your eyebrows like this for another 28 years xxxxxx.”

Fans and celebrities alike were quick to wish the loving couple a happy anniversary, many lauding Emdur for his “beautiful words”.

Australian singer-songwriter Guy Sebastian was among the first to congratulate the couple on their latest milestone.

“Congratulations on your wedding anniversary. I’m jealous (in a good way) of the true love you two share…….so beautiful & sincere. You’re both so very lucky to be able to love each other in such a wonderful manner,” one fan commented.

“Happy anniversary to you both beautiful words Larry,” wrote another.

“So beautiful. I wish that all men loved their wives this way. Happy anniversary.”

“Love how in love you guys are .. an inspiration to us all..Congrats Larry & Sylvie may your next 28 bring you the very best in life.”

Emdur has never been one to shy away from sharing his love for Sylvie on social media, in 2017 the 57 year old shared a saucier post of his wife while the couple were enjoying a holiday in Europe.

While in Germany, Emdur posted a picture of Sylvie in a store holding up a Bavarian beer maid’s outfit against herself which he was clearly a fan of.

“Husband Confidential: Sometimes when my wife is shopping overseas I’m bored out of my brain, but when she’s trying on Bavarian Beer Maid outfits I be like “Woohooo I’ll take 5 in every different colour!! Quickly where do I pay ??? And order me a cab urgently we need to get back to the cabin ASAP!!!!” he wrote alongside the photo.

For all the love that the couple share, the pair still have their squabbles like any couple.

In a light hearted video earlier this year, Emdur shared his unorthodox dish-stacking method which he admitted “Sylvie hates”.

Fans were left equally perplexed with his method of dish-stacking, which involved stacking dishes on top of each other in all manner of ways on the drying rack.

“Sylvie hates it when I do this, she says it causes her large amounts of stress…I think it’s a clever and practical use of space. What do you think?,” he captioned the video.

Sunrise Host, Natalie Barr, was quick to shoot down his dish washing method and sided with Emdur’s wife on the matter.

“She is right. You are wrong,” she wrote at the time.