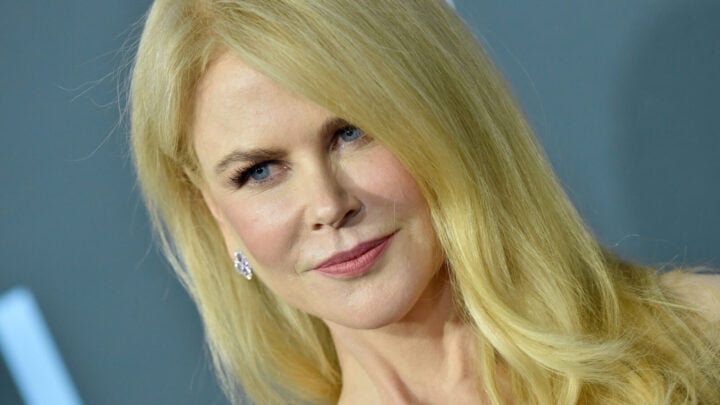 Nicole Kidman stars on the cover of the September issue of Marie Claire. Source: Getty

Nicole Kidman is no stranger to a glamorous photoshoot, and her latest might just be her most fabulous yet.

The Academy Award-winning actress stars on the cover of the new issue of Marie Claire, channeling some serious vintage Playboy bunny vibes in a pair of fishnet tights and a plunging black-and-white playsuit complete with a black bow.

Other photos in the magazine show Nicole rocking a stunning black gown and matching gloves with tight, knee-high boots.

In the broad-ranging accompanying interview, the Aussie actress spoke about her “miracle” marriage with fellow Aussie Keith Urban and her regrets over not having more children. Nicole has been open about her fertility struggles in the past and told the magazine she “would’ve loved 10 kids”.

“I wish I’d had more children, but I wasn’t given that choice,” she said.

“But that’s OK because I get to mother other children. I have six nieces and nephew and I’m godmother to 12. I love mothering, I love kids: they’re quirky, funny and unfiltered. And then you get to see them grow and send them on their way.”

Nicole and Keith have two daughters together, Sunday Rose, 13, and Faith Margaret, 10. Nicole is also mother to Bella, 28, and Conner, 26, who she adopted with her ex-husband Tom Cruise.

Asked about her husband, Keith, the Nine Perfect Strangers star said their union was kismet.

“Two Aussies born in the same year, but living in different worlds and cities, how did that happen? It was meant to be.”

The pair are famously loved-up and very open about their relationship compared to other Hollywood couples. Speaking with WSJ Magazine in 2020, Nicole said she could recall the exact moment she knew she wanted to marry the country singer.

Keith had whisked her away for a weekend at Woodstock in New York and the pair shared a romantic picnic in the woods.

Speaking with Marie Claire, Nicole also touched on her career resurgence in her 40s and 50s – an age when many actresses find themselves struggling to secure leading roles. Nicole has starred in a string of hits over the past few years, including Big Little Lies (for which she won a Golden Globe), The Undoing, and Bombshell. Her latest project, Being the Ricardos, in which she plays comedy legend Lucille Ball, is already generating award show buzz.

In January it was announced that Kidman was in line to play Lucille in the new movie, with No Country for Old Men and Skyfall star Javier Bardem set to play the comedian’s husband Desi Arnaz. The movie follows the highs and lows of the couple’s relationship and is set during one production week of I Love Lucy.