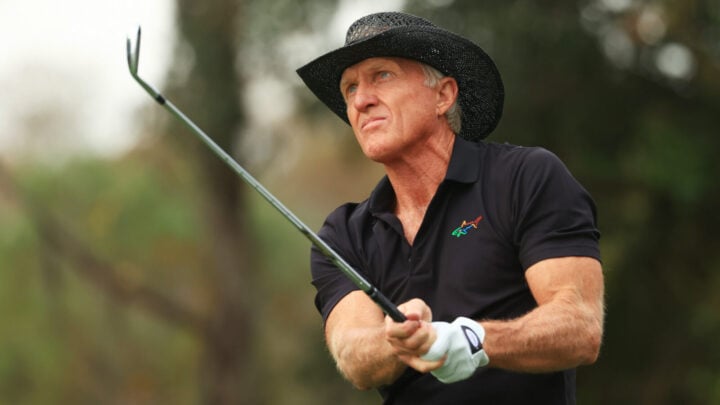 The Australian golfing legend has made headlines again. Source: Getty

Greg Norman made international headlines last year after he uploaded to Instagram a somewhat X-rated photo of himself at the beach. Now, it looks like the golfing legend is up to his old tricks again!

On Monday, the 66-year-old posted a shower snap on his Instagram account to bid farewell to his sprawling Jupiter Island property, named Tranquility, which recently sold for US$60 million (AU$78.4 million).

Unlike Greg’s previous beach pic, which at a first glance comes off as a seemingly innocent photo, ‘The Shark’s’ latest offering leaves nothing to the imagination. This time, Greg has ditched his clothes altogether, giving fans full view of his bare bottom.

Greg’s wife of nearly 11 years, Kirsten Kutner, took the pic. “After 30 years, this is my last sunset shower at Tranquility,” he captioned the post.

To no surprise, Greg’s saucy picture generated a slew of comments from fans, with the majority cheering on the golfing legend. “I can only dream of being in that kind of shape in 10 years when I am 66,” one commenter wrote. Another added, “You are an absolute machine.” While a third said, “Still in great shape after 60. #myhero.”

However, others thought he had taken his latest Instagram antics a step too far, with one commenting, “Oh Greg. Why?” Another added, “Greg you’re a legend but we don’t need 70-year-old asses on our phones! No matter how good you think it is!!”

Greg sent the internet into a frenzy last year after he posted that now-famous photo of himself and his dog at a beach in Florida to social media. Soon after the picture was uploaded, a number of his followers hilariously pointed out a very X-rated detail.

“There is more than one man and his dog in that first pic,” one fan commented at the time. Another cheekily added, “More like ‘a man and his hog’.” While a third joked, “Jesus Greggy, should [have] left the putter at home.”

Do you find Greg's latest photo amusing or do you think he has gone too far?