‘What a disappointment’: Dame Judi Dench reveals her one career regret 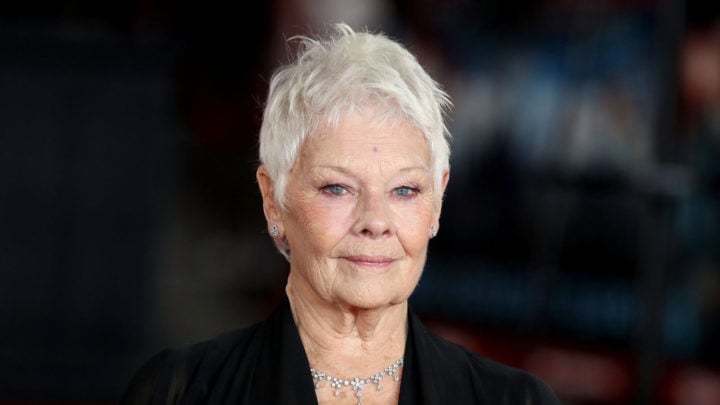 Dame Judi Dench opened up about her career to date and what she regrets. Source: Getty

Dame Judi Dench has forged a long and successful career on the big screen, starring in many hit films and most recently, making her debut on the front cover of the British Vogue magazine, but the actress said she still has one secret regret.

Though she’s known globally as one of the great Hollywood stars, the 85-year-old admitted she wished she’d done more sex scenes. In a recent interview with The Mirror, Dench said: “I have done a few bed scenes. Not many in the theatre. What a disappointment.”

Though it may be a big regret of the star, she’s certainly made a name for herself in the industry. From the much-loved James Bond movies to Shakespeare in Love, Notes on a Scandal and Philomena, Dench has come a long way from the day when she was told she’d “never make a film”.

According to the talented actress, in the early days of her acting career she was told she didn’t have a face for movies and would likely never star in a hit film.

“They told me I would never make a film,” Dench told The Mirror. “To which there is no reply. I put my chair against the wall. I am not quite sure why. I walked out.”

She added: “I did not want to do films anyway. I never thought I’d have a future in films as the stage is my passion. It’s never ever the same in a theatre, never. You always got a different reaction to things.”

Her comments come just days after it was revealed Dench had become the oldest person to ever grace the cover of British Vogue magazine at the age of 85. The actress, whose career spans an impressive six decades, appears on the cover of June’s issue of the glossy fashion magazine, beating out Jane Fonda to become the oldest cover star.

Last year Fonda appeared on the front of the magazine at the age of 81 but, at four years her senior, Dench has now claimed the title.

Several of the photographs have been shared on social media, ahead of the magazine hitting shelves, and fans of the star were blown away by Judi’s appearance, as she showed off her natural and timeless beauty.

Introducing the June 2020 issue of #BritishVogue where Dame Judi Dench, at 85, makes history as the oldest person ever to star on the cover of Vogue. Before the coronavirus pandemic forced the world into lockdown, @GilesHattersley visited her home in deepest Surrey to discuss everything from why retirement is completely out of the question, to how she has become a social media phenomenon – without being on social media herself. Click the link in bio to read the interview and see the full story in the new issue, on newsstands and available for digital download on Thursday 7 May. #JudiDench wears a trench coat by @DolceGabbana. Photographed by @Nick_Knight and styled by @KPhelan123, with hair by @SamMcKnight1, make-up by @TheValGarland, nails by @MikePocock and set design by @TomoTattle.

Sporting her signature cropped hair-do and wearing a colourful floral ensemble, fans praised the magazine for breaking boundaries with Judi’s appearance on the cover. The simple yet striking photo showed Judi clutching at the collar of a bold floral shirt, with a subtle knowing smile spread across her face.

Several others photos from the Cats star’s shoot were also shared by the magazine, including one of her donning a show-stopping kimono-style jacket, with rows of silver diamantes adding a touch of glamour to the classic ensemble.

After six decades on screen and stage, it’s safe to say Judi Dench commands public affection on an industrial scale. In the June 2020 issue, Dench invited #BritishVogue inside her Surrey home to discuss love and marriage (she’s had four proposals), her expansive repertoire of awards (including 11 BAFTAs and one Oscar), and a brief fling with rap music, delivering a message of hope at a time when we need it most. Read the full interview with @GilesHattersley at the link in bio, and see the full story in the new issue on newsstands and available for digital download Thursday 7 May. #JudiDench wears a coat by #GiorgioArmaniPrivé and dress by @_LA_Collection_. Photographed by @Nick_Knight and styled by @KPhelan123, with hair by @SamMcKnight1, make-up by @TheValGarland, nails by @MikePocock and set design by @TomoTattle.

Dench also sat down with the magazine to answer some questions about her life, covering her illustrious career all the way up to her time in self-isolation recently. And when the topic of retirement was brought up, the James Bond star was adamant that is a long way off, with no chance of her slowing down any time soon.

Are you a fan of Judi Dench? What is your favourite movie she has starred in?