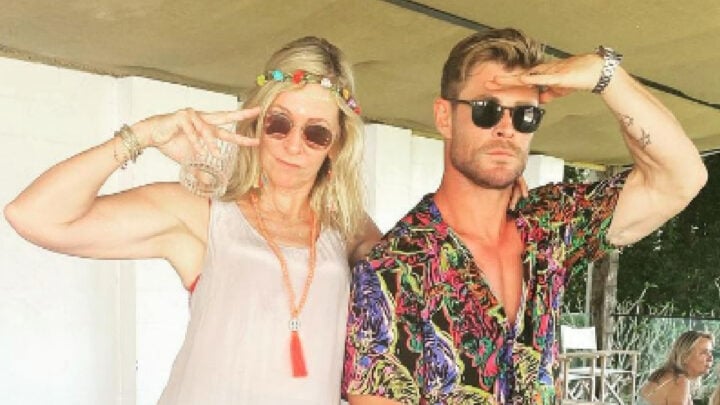 Aussie actor Chris Hemsworth is used to having fans swoon over him, with his good looks and charm winning the hearts of people across the country and the globe, but this week the attention turned to his mum Leonie instead, with followers gobsmacked by how incredible she looks.

It all began when the 37-year-old posted a series of photos of them together to his Instagram page in celebration of her 60th birthday. In the pictures the mother and son could be seen posing side-by-side, Leonie wearing a casual white dress, and Chris sporting a multi-coloured shirt and shorts.

“Happy 60th to the greatest mum on earth,” the actor wrote alongside the post. “Love ya mum.”

But, instead of the usual swooning over Chris, many of the comments were about how great Leonie looked, with some even claiming they thought it was the actor’s partner Elsa Pataky in the photo.

While @georgiaous03 said: “Wait what? She’s 60? She looks so damn young!” And @hereisjanelle added: “Seriously your mum? Wow!”

It’s not the first time fans have been wowed by Leonie’s looks. Earlier this year Chris shared a photo of himself with his mum and his wife together in celebration of Mother’s Day, and again the comments about Leonie flooded in.

“It looks like your wife is a little sister and your mum is the older sister, crazy how much they look similar,” @goldenmovieclips said. While @dalia_navarro_meguenni added: “[Your] Wife is a younger version of your mum.”

Even Chris’ wife Elsa is amazed by her mother-in-law’s appearance. Late last year during a chat with Body and Soul, the actress said she credits Leonie for taking her down the intermittent fasting path – where you only eat during set hours each day – complimenting her mother-in-law on looking so great for her age.

“The first person we knew who started [intermittent fasting] really strict was Chris’ mum, actually,” she told Body and Soul. “She just looks amazing! She’s 60 almost, 59, and every year looks even better… she started with one day of fasting once a week and then she started with the 15-16 hours of fasting.”

Are you a fan of Chris Hemsworth? What do you think of the photo of his mum?