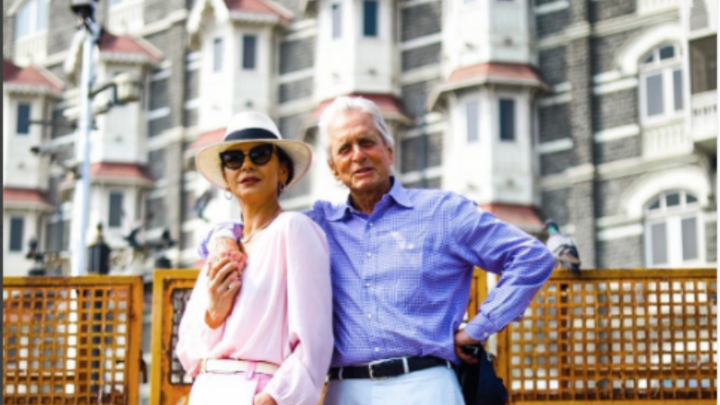 The couple have been married since 2000. Source: Instagram/Catherine Zeta-Jones.

Catherine Zeta-Jones took to social media this week to proclaim her love for husband Michael Douglas by posting a vibrant shot of the pair from their travels to Mumbai, India.

The Chicago actress shared the glamorous photo with her 3.2 million Instagram followers, with the caption: “Love this man, a pic of us in India. Life is just better because of you.”

Fans took to the comments to show their adoration for the pair, with one writing: “Awww that’s so sweet! Love the way you love each other”. Another commented: “Beautiful couple inside and out”.

One commenter even reflected the compliment back to Catherine by writing: “Sweet. I’m sure his sun shines brighter because of you”, while a fourth said: “I love that you two are together”.

The long-term couple will be celebrating a milestone wedding anniversary towards the end of the year after being married for twenty years. Together, they share two teenage children, Dylan, 19, and Carys, 16, who they often holiday with — most recently to Africa over the Christmas break.

The loving photo from Catherine came only weeks after Michael’s father Kirk Douglas passed away at the age of 103. The Spartacus actor was a Hollywood icon and is survived by his children, grandchildren, great-grandchildren and his wife of 66 years, Anne Buydens.

Michael shared a heart-wrenching tribute to his late father on social media where he called him a legend and a humanitarian. The Basic Instinct actor wrote: “It is with tremendous sadness that my brothers and I announce that Kirk Douglas left us today at the age of 103.

“To the world he was a legend, an actor from the golden age of movies who lived well into his golden years, a humanitarian whose commitment to justice and the causes he believed in set a standard for all of us to aspire to.

“But to me and my brothers Joel and Peter he was simply Dad, to Catherine, a wonderful father-in-law, to his grandchildren and great-grandchild their loving grandfather, and to his wife Anne, a wonderful husband.

“Kirk’s life was well-lived, and he leaves a legacy in film that will endure for generations to come, and a history as a renowned philanthropist who worked to aid the public and bring peace to the planet. Let me end with the words I told him on his last birthday and which will always remain true. Dad- I love you so much and I am so proud to be your son. #KirkDouglas”

Meanwhile, Catherine posted a sweet photo of her planting a kiss on the cheek of her father-in-law with the caption: “To my darling Kirk, I shall love you for the rest of my life. I miss you already. Sleep tight…”

Following the sad loss to their close-knit family, the couple spoke of their appreciation for everyone who shared words of love and kindness during the tough time with a message from Catherine that read: “Michael joins me in thanking you all for your overwhelming love, kind words and prayers since the passing of my father in law Kirk. My whole family appreciated every word. Love to you all.”

Are you a fan of this couple? Were you sad to hear about Kirk Douglas' passing?