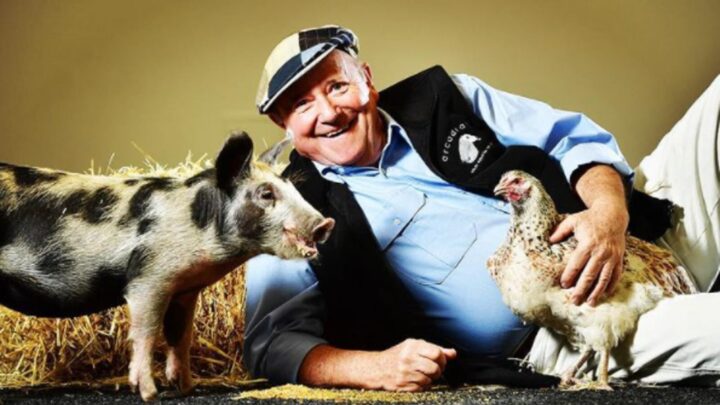 Champagne flowed along with tears of joy after beloved television vet Dr Harry Cooper and his long-term partner Susan  Sheeran tied the knot earlier this month.

The loving couple exchanged vows in front of 42 of their closest friends and family at their 125-acre estate in Port Macquarie, in an intimate ceremony that was planned in just six weeks.

They even had one of their pets, Wendy, a 12-year-old Australian stock horse mare, as their ring bearer for their big day.

“Everything was perfect, and not many brides can say that, but it was,” Sheeran, 62, gushed in her interview with Woman’s Day.

“I’ve waited all my life for this bloke … he’s a real genuine person – what you see is what you get.”

Her blonde locks were pulled back and off her face in a low and glassy bun. For accessories, Sheran wore a classy necklace with simple earing and bracelets to match.

Her husband was equally as dashing in his smart beige linen suit and crisp white button-up.

Dr Harry, 78,  accessorised with a brown belt, which matched his brown dress shoes, and complimented his beige fedora.

The couple’s special days was years in the making after a chance encounter at a mutual friend’s barbecue,  the couple have been inseparable ever since.

“We just connected – we clicked straight away,” Sheeran recalled.

“I absolutely knew who he was [from television], but who doesn’t, but that aside it was about the connection and conversation – we were on the same wavelength!” Sheeran told Women’s Day.

Much like his wife, Dr Harry knew Sheeran was the one for him.

“I saw a blonde lady sitting down the end of the table… and I thought she was so good looking,” Harry told the publication.

Dr Harry also revealed that seeing his “stunning” bride walk down the aisle was one of the happiest moments of his life.

“I’m all choked up just thinking about it,” he said.

Although their life has been filled with creatures great and small and many shared adventures, the couple has also been faced with the tragic loss of Dr Harry’s eldest daughter Tiffany who died of colon cancer in February 2012.

Dr Harry had previously told Newscorp that after his daughter’s death, he leaned heavily on his two other children, as well as Tiffany’s husband, and his now wife who he considers his “rock’’ and “support.”

In a touching tribute to his late daughter, Tiffany’s favourite flowers sunflowers were featured heavily at the ceremony.

Are you a Dr Harry fan?