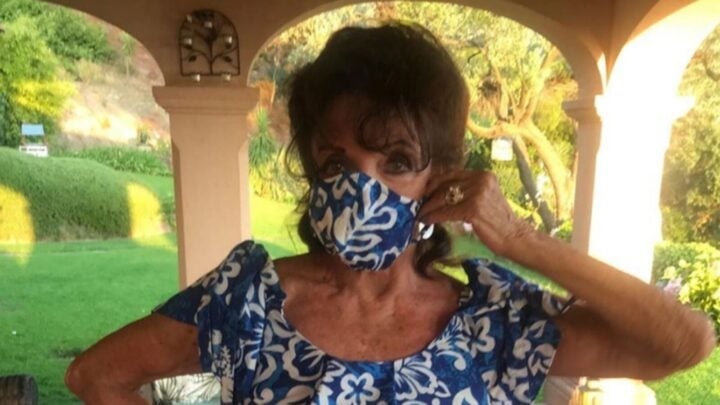 Joan Collins took a break from her usual Hollywood glam to show off her stunning holiday-chic outfit in a new photo she shared from her St. Tropez getaway. The 87-year-old took to Instagram donning a gorgeous blue floral midi dress with a ruffled hem and a matching face mask to top it off.

The film legend playfully posed for the camera with her hair styled into a blowdried up-do while flaunting her signature glamorous face of makeup which still shone through despite the face covering. Collins, who’s been holidaying in the South of France, mentioned her matching outfit in the caption while joking about the fact that she was going against her word by wearing it.

“Matchup! Thank you Jackie Palmer for making this outfit, even though I said I would never wear a matching mask #mask #Covid,” she wrote.

Commenters and fans of the Dynasty star shared their words of support with one writing: “I think we’re all now doing some ‘never’s’ you look fabulous Dame Joan & what a beautiful verandah” while another said: “The matching mask looks fabulous “.

The post comes after the star revealed she was “yelled at” by police at an Ikea in France after she was found swapping her face mask for an illegal plastic visor. In her column for the Spectator, Joan said the incident occurred as she was checking out the store’s basic food menu.

“An officious gendarme became deeply offended by it, and while I was mulling over the benefits of Ikea’s gravadlax vs its smoked salmon, he pounced,” she wrote. “Gesticulating in Gallic fashion, he yelled at me to put on a proper mask, because visors aren’t legal.

“Chastised, I slunk away, muttering an Anglo-Saxon expletive under my breath, which, as he glared at me, I feared he might have understood. I then tried wearing a clear plastic face mask, of the sort which all the staff at the Byblos were wearing, but although it was easier to speak and to be understood, it forced my face into a hideous rictus.”

The star is currently holidaying in her St. Tropez home with loved ones and friends where face masks have been mandatory in indoor public spaces since July 21.

Do you like Joan's outfit? Do you own a matching mask and outfit?