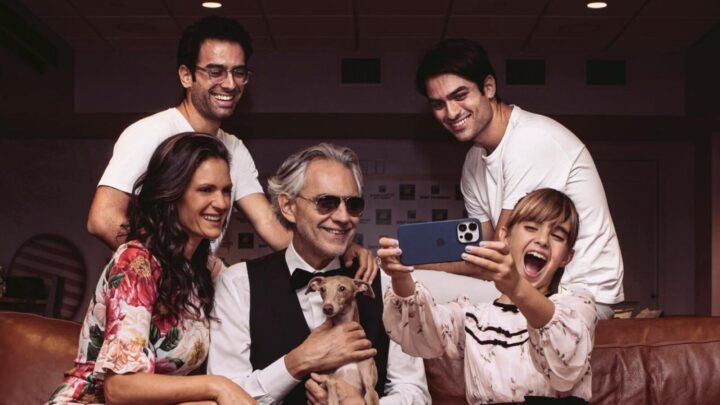 A Family Christmas, which will be released October 21. Source: Instagram @andreabocelliofficial

World-renowned Italian tenor Andrea Bocelli is giving his fans the greatest gift this Christmas, announcing the release of his first album in collaboration with his two kids.

Titled A Family Christmas, the 63-year-old father of three is joined by his two youngest children Matteo, 24, and Virginia, 10, in recording a Christmas album filled with festive favourites, new songs, solo tracks and trio performances.

Their first single The Greatest Gift is scheduled to be released this September 8 and will feature all three family members.

Proud father Andrea said he considers it a “privilege” to be able to work with his children.

“There’s nothing more beautiful than making music with your kids,” he said.

“We are offering our small, intimate, and heartfelt gift to anyone who wishes to enjoy the soundtrack of Christmas in the Bocelli home.”

Agreeing with his father, Matteo said “singing these songs together, feeling the holiday warmth with my family is something really special.”

“That’s what Christmas is about – making memories together to cherish forever. It’s really exciting to think that people will have a copy of our album sitting wrapped under the tree.”

Neither Matteo nor Victoria are new to the music scene, having both inherited their father’s talent and passion for singing.

Matteo launched his solo music career in 2019 while his younger sister had previously performed Hallelujah alongside their father for the Believe in Christmas concert in the Italian opera house Teatro Regio di Parma.

The release of his family’s upcoming album coincides with his upcoming October 2022 five-city national tour of Australia.

As reported by the Herald Sun, the Italian prodigy wants to bring “serenity” to his Australian fans.

“The Australian tour dates are not just concerts to me, they are opportunities for us to immerse ourselves in musical beauty on a grand scale,” Bocelli said.

“For these upcoming shows, my aim is to restore some serenity and enter gently into people’s hearts.

“If my previous tours are anything to go by, I’ve always found Australian audiences to be passionate, enthusiastic and friendly. I truly appreciate my generous and engaged Australian fanbase and am proud to be even a small part of the soundtrack to so many people’s lives.

“With its ability to inspire and heal, music is its own language and I never tire of performing these songs – even the ones I’ve been singing in concert for more than 25 years – because they move me so deeply. Music is essential nourishment for the human spirit.”

Bocelli’s most recent performance was the Queen’s Platinum Jubilee Party at the Palace, which the opera star labelled “a milestone exceeding all expectations”.

A Family Christmas will be released on October 21.