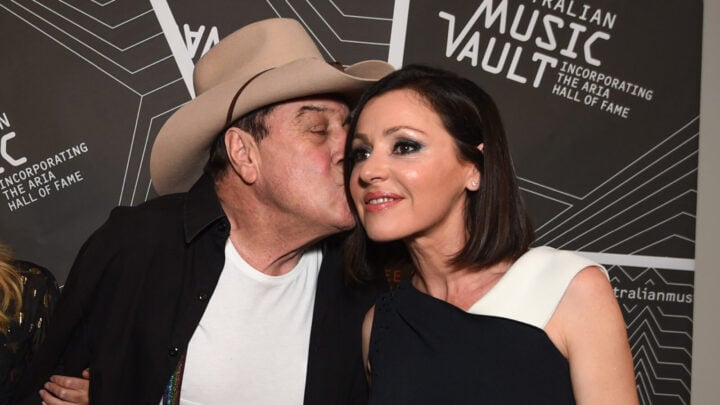 Television legend Ian “Molly” Meldrum has made a rare appearance to surprise his longtime friend and fellow entertainer, Tina Arena, to praise the singer on her episode of This Is Your Life on Channel 7.

Appearing on the final episode of the program, which takes a look at the accolades and relationships of the guests, Arena was obviously touched by Meldrum’s tribute.

Entertainment icon Ian “Molly” Meldrum has made a surprise return to TV with a heartwarming tribute to a longtime celebrity pal, Tina Arena https://t.co/b51MwxE9Ev pic.twitter.com/CKJKeF2oQ0

“Hi Tina! It’s your friend, boring old Molly. Oh my god, I won’t leave you alone, Tina. You and I have been friends for a long, long, long time,” Meldrum said.

Mentioning the fun parties the pair have attended together, Meldrum said: “I won’t say a word, everyone behaved … Bulls**t. Anyway, I behaved.”

“Do yourself a favour and have a great night,” he ended his sweet message to his friend.

The prerecorded message melted Arena, who gushed about Meldrum, saying he was an exceptional man who’d certainly left his mark on the entertainment industry.

“There’s a soul, there’s a spirit. There’s someone who really did give an enormous amount to the arts in this country. He was always unbelievably supportive, an extraordinary man,” she said.

The surprise TV appearance is the first time the iconic 79-year-old has been spotted since he made a rare public outing to watch an AFL match between the St Kilda Saints and the Richmond Tigers at Marvel Stadium on Sunday, April 3.

Spotted wearing a scarf in the St Kilda colours as well as his iconic Stetson hat, Meldrum took to the field to shake hands with players and handed Brad Crouch the award for Best on Ground.

Meldrum’s public appearances have been few and far between after he was severely injured in a fall in December 2011. After being found unconscious in the backyard of his Richmond home, he was placed in intensive care at the Alfred Hospital and received surgery for head injuries. In addition to his head injuries, he suffered a broken shoulder, broken ribs, a punctured lung and cracked vertebrae and was in a coma for five weeks.

In a 2021 interview, Meldrum told New Idea that the accident made him “realise that life is short.”

“I was very lucky that I had many wonderful people caring for me at the time of the accident and afterwards, which was a real godsend. I also learnt a lot from the patients in the hospital. Hearing their stories, the hardships they’ve had to go through, it was humbling,” he said.

Meldrum is well known for his long standing career as a music critic, journalist and record producer. He is best known for his work as on-air interviewer and music news presenter for the former popular music program Countdown.