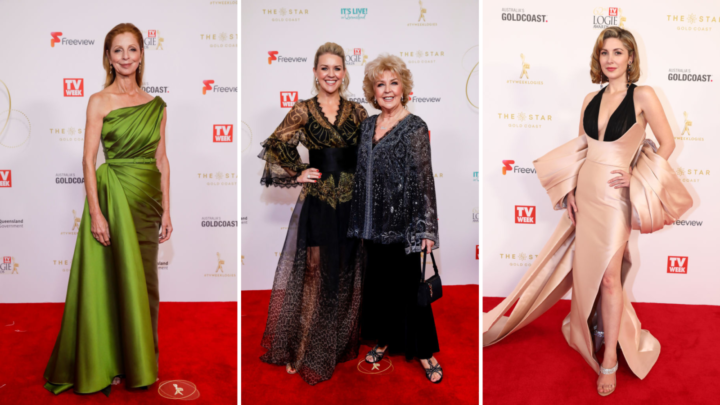 Who wore what: These are some of the most eye catching looks from the 2022 Logie Awards. Source: Getty

It was a night of glitz and glamour as Australian celebrities gathered at the Gold Coast on Sunday, June 19, for the highly anticipated Logie television awards.

Aussie TV icons far and wide brought back glitz and glamour on the red carpet after the award ceremony had been canned for two years in a row due to the Covid-19 pandemic.

But with the Logies now done and dusted, these are some of the most fashionable moments on the red carpet that deserve a second look.

68-year-old television icon and Logie’s Hall of Famer, Kerri-Anne Kennerly arrived at this year’s Logies wearing a jaw-dropping, all-white, mermaid-style gown. While the dress itself was quite conservative, its style hugged her curves in all the right places and featured dramatic sleeves with a white feather trim, that swept the floor while she walked the red carpet.

Television Host Sophie Monk was one of the many stars who opted for a dress that not only showcased their effortless style but also showed off some skin. Wearing a Steven Khalil gown, the 42-year-old actress tells 9Honey’s Shelly Horton that her 2022 Logie red carpet look pays homage to the iconic Gold Logie award.

“I’ll keep dressing like a Gold Logie until I win one,” she says. Her sexy gold ensemble featured a plunging sweetheart cut bodice, a thigh-high slit, and a floor-length train. The gown was covered in a variety of crystals and also had a thin gold belt that sinched her waist. To complete her look she wore nude high-heeled pumps and metallic gold nails.

While this year’s Logie awards saw an abundance of flowy, colourful frocks, there were also a number of female attendees who opted for fancy suits. For her red carpet look Australian comedian Julia Morris wore a royal blue Alin Le’Kal suit, perfectly tailored to her fit frame. The TV personality also wore sparkling diamond and blue sapphire jewellery, that matched her glittering slingback kitten heels. To complete her look, Morris wore clear glasses with a light blue hue and tied her look together with coral red lipstick.

Kennerley wasn’t the only celebrity who rocked the dramatic sleeve look for the 2022 Logies, comedian and actress Magda Szubanski also showed off some impressive sleeves. The Kath and Kim veteran was all smiles as she posed for the camera, arms stretched wide to show off her deep turquoise-coloured kimono-style robe which featured a floral pattern on her shoulders. Paired with her dramatic robe was a matching shirt and pants set.

The 63-year-old The Project host oozed elegance as she showed up to the award night wearing a black off-the-shoulder evening gown by Velani. The brunette beauty’s gown featured a fully feathered skirt, a contrast to her smooth satin top. Wilkinson wore her brown locks down in soft waves and accessorised with a pair of gold and pearl dangling earrings.

Mother-daughter duo Lauren and Patti Newton were also in attendance for the Logie red carpet. Lauren looked absolutely stunning in a black sheer number that featured a leopard print at the bottom of the dress and intricate gold patterns across her chest and ruffled sleeves. The 42-year-old wore her blonde hair in a messy ponytail and wore silver and diamond jewellery. Her mother Patti, 77, looked equally radiant in a midnight blue long-sleeved blouse adorned with silver and blue detailing which she paired with a long, black velvet skirt and black strappy heels.

This year’s Logies was also an emotional one for the Newtons as Patti took to the stage to deliver a heartfelt tribute to her late husband, Bert Newton, who passed away last October 30, 2021.

Amanda Keller was another TV icon who rocked a suit for her red carpet look, but unlike Morris, Keller’s outfit was much more dramatic. The black suit featured intricate gold details on both the pants and her suit jacket. Keller paired her suit with a black crisp button-up and pointy suede heels.

Who do you think had the best look at the Logies this year?