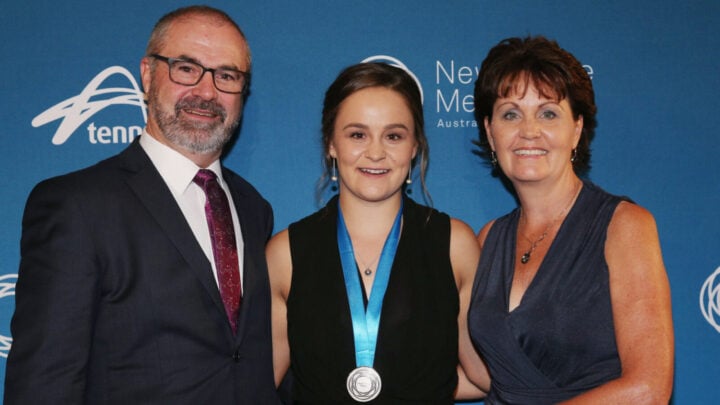 The father of now-retired tennis great Ash Barty has opened up on his daughter’s shock retirement announcement, claiming he “knew it was coming.”

During a visit to the Sarina Tennis Association Robert Barty told the Courier-Mail Ash’s family “were happy” following her retirement and that “she needs home time.”

“Last year she was on the road for eight straight months because of Covid, she couldn’t come home.

“She’s been travelling the world since she was 13.”

Robert said Ash was seeking “a break from tennis.”

“She’s done everything she wanted to achieve in tennis,” he said.

Following Ash’s bombshell retirement announcement many have been left wondering what the tennis superstar will do next and whether she will pursue a career in another sport.

“She’s too good. She can beat me. She’s the best golfer in the house,” he said.

When asked what his daughter’s next moves were, he admitted he wasn’t sure but that golf could quite possibly be her next sporting endeavor.

“I don’t know what she’s going to do to be honest, but I know she gets a lot of enjoyment out of golf so I think she’ll play (more),” he said.

“But I don’t know what she’ll do (professionally).”

Barty has previously tried her hand at cricket, signing with the Brisbane Heat for the annual Big Bash League season in 2015.

“She had told me she had played a little bit of backyard cricket growing up and the odd game for her school, so I wasn’t expecting too much. But she must have played and missed less than five times, if at all, throughout that session,” Richards said.

“I’ve been coaching cricket for a long, long time and I genuinely don’t think I had been as excited watching someone play, essentially for the first time.”

Ash Barty sent shockwaves through the tennis world after announcing her retirement from the sport at just 25 years old.

Alongside her former doubles partner, Casey Dellacqua, the World No.1 took to Instagram to announce the move on March 23, telling fans “today is difficult and filled with emotion for me as I announce my retirement from tennis.”

“I wasn’t sure how to share this news with you so I asked my good friend @caseydellacqua to help me. I am so thankful for everything this sport has given me and leave feeling proud and fulfilled. Thank you to everyone who has supported me along the way, I’ll always be grateful for the lifelong memories that we created together,” she said.

Barty began playing tennis at the age of four. She was the second Australian tennis player to be ranked No. 1 in the world in singles by the Women’s Tennis Association and is also a three-time Grand Slam singles champion.