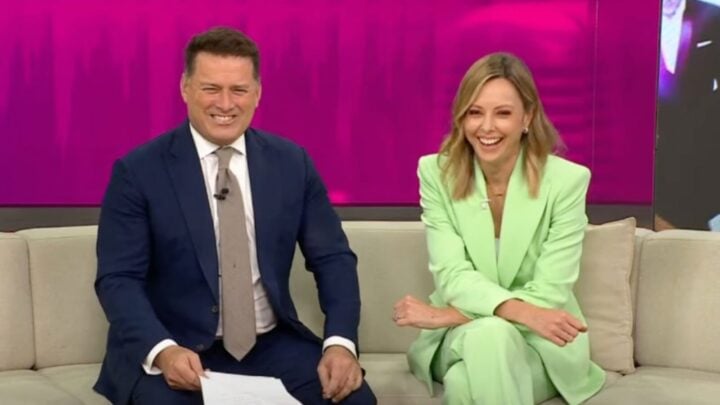 Allison Langdon’s weeklong hiatus from the Today show has further stoked rumours that the journalist is Tracey Grimshaw’s A Current Affair (ACA) replacement after she was grilled by her co-host Karl Stefanovic over her whereabouts.

The exchange fast became an awkward moment for Langdon, who appeared to stumble over answering how she spent her mysterious absence.

“We missed you. How did filming go?,” Stefanovic asked.

Langdon gave a vague response: “Filming was alright. It went well and the kiddies were good. I’ve got them back in line.”

Stefanovic questioned her answer: “I thought you were filming?”

“I was filming for 60 Minutes,” Langdon clarified.

“I thought you were filming with the kids,” Karl continued to grill.

“I forgot how hard it can be. It’s lovely to be back,” Allison joked, before immediately moving on to the next segment of the show.

However, the grilling didn’t stop there, as the presenter was put back on the spot during an interview with radio personality Kyle Sandilands.

The controversial entertainer interrupted his own interview to demand answers from Langdon.

Langdon attempted to laugh it off: “I am going to do the Today show, do A Current Affair and coach the Wallabies … and I reckon I can be the Premier of Victoria.”

“Let’s stop the speculation. Are you doing A Current Affair? Or has Jackie (Henderson) gone off to do A Current Affair? I don’t know. Just tell us,” Sandilands said, referencing his co-host Jackie-O, who has taken a leave of absence from the radio duo’s show.

Langdon continued to try and laugh off the intense line of questioning, saying she couldn’t leave Stefanovic.

“Because I sit next to this face, and who could leave this face?,” she said.

“Well his face has been left before, multiple times,” Kyle retorted.

Langdon jokingly responded: “He can’t afford any more therapy bills, I will stay and annoy him.”

But like a dog with a bone, Sandilands demanded one last time: “Are you doing it or not?”

A flustered Langdon responded: “Far out! With all this questioning, he should be doing A Current Affair!”

Langdon is amongst the favourites for Grimshaw’s soon-to-be-announced ACA replacement, along with media personalities such as Carrie Bickmore, Karl Stefanovic, and Sylvia Jeffreys.

The highly sought-after role is up for grabs after Grimshaw announced she would be stepping down as presenter following an impressive 17 years as host.

The veteran journalist shocked fans with the announcement at the end of A Current Affair’s Monday, September 6 broadcast, explaining that she made the choice to step down and wasn’t “being shoved out the door by the boys club” because she was “too old”.

“I’m not too old, I’m just a bit tired. And for the record, both the boys and the girls have asked me to stay.