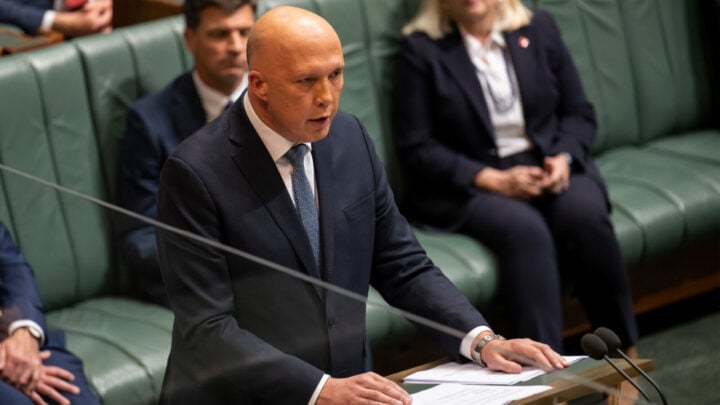 Dutton referred to the "difficult times" that Australians are faced with as energy prices continue to rise and cost of living pressures continue to be felt across the nation. Source: Getty Images.

Opposition Leader Peter Dutton has labelled Labor’s first Budget “a missed opportunity” that does little to “alleviate” the pressures associated with the rising cost of living.

“Labor’s Budget was a missed opportunity to help you at a time when you need help,” Dutton said.

“It didn’t address our economic challenges or inspire confidence.”

Dutton referred to the “difficult times” that Australians are faced with as energy prices continue to rise and cost of living pressures continue to be felt across the nation.

“Under Labor’s Budget, electricity prices are set to rise by more than 56 per cent and gas prices by more than 44 per cent,” he said.

“We all know these are difficult times.

“Nations around the world are contending with economic challenges born from the pandemic and amplified by Russia’s invasion of Ukraine.

“But thanks to the Coalition Government’s record, the fundamentals of the Australian economy are strong.

“Costs-of-living are going up partly due to global conditions. But also due to this Labor Government’s bad decisions.”

Dutton also set his sights on Treasurer Jim Chalmers in particular, taking him to task for his “bad decisions”.

“The Treasurer said his Budget ‘makes hard decisions for hard times’,” he said.

“But I say his Budget makes bad decisions – making hard times even harder for all Australians.”

However, the Opposition Leader didn’t “disagree with everything in the Budget”, conceding that there were “good measures” that the Liberal National Party (LNP) “commend” the Labor party for.

Dutton voiced his support for the Budget’s extension of the childcare subsidy, reducing the cost of medication, support for housing veterans, initiatives to combat domestic violence, and funding to help Australians ravaged by floods.

Our budget is delivering for Australians today, and building a better future. pic.twitter.com/iE4gdQ40GX

Prime Minister Anthony Albanese was quick to respond to Dutton’s verbal attacks, telling Sky News that the Opposition Leader didn’t offer any new policies or clearly outline the LNP’s plans for the future while accusing Dutton of being “stuck in the past”.

“Peter Dutton last night gave I think the worst budget reply that’s been given during in my time in politics,” Albanese said.

“It was just all about him being stuck in the past, trying to rehash old arguments about climate change and about culture wars.

“There were no plans for the future in Peter Dutton’s address last night.

“And the one thing that he re-announced was he rehashed the policy to raid people’s super funds, damage their retirement incomes, and a policy that would lead to higher housing prices.”