Choosing an executor: Why it’s a big job to give a loved one, or to take on 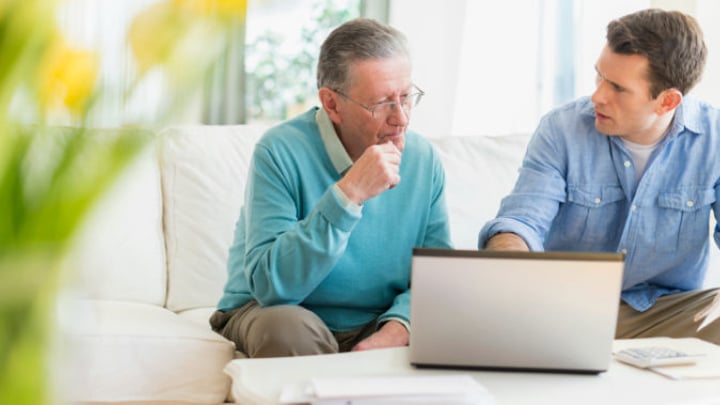 It’s common for parents to nominate their adult children as their executors, or vice versa, but a Westpac survey shows neither party is likely to know what responsibility they’re taking on. (Picture posed by models.)

In fact, research from Westpac found that only 26 per cent of Australian men and 13 per cent of women said they’d know what tasks were involved with being the executor of a will.

While in simple terms, an executor administers our estate and distributes our assets upon our death, some of the legal and tax implications may make the role feel like more a burden than an honour if we nominate our loved ones to do it and they aren’t prepared for the task.

Brian Herd, a partner at CRH Law and specialist in estate planning issues, explains that the executor’s duty is to execute the instructions in the will, which involves finding the assets, paying any debts, locating the beneficiaries and distributing the estate to the beneficiaries in accordance with the will.

On top of all that, meeting the deceased person’s tax obligations is another significant responsibility that executors take on, Herd notes. It’s one of several issues for which an executor is considered personally liable – that is, if the executor fails to undertake these tasks, they could be pursued themselves by the relevant authority.

Managing tax affairs can get particularly complicated in estates that involve family trusts, businesses and other complex financial arrangements, so if you’re asked to be the executor of such an estate, it’s important to consider whether you’re ready to take on the complexities that may be involved.

And, Herd says, it’s up to the executor to submit two tax returns on behalf of the deceased person – one return covering the period up to the date of their death, and a final return from the date of death to the date of distribution of the estate to the beneficiaries.

It’s also the executor’s role to ensure all assets remain insured and secured. Herd uses the example of a property becoming vacant after someone has died. Typically, he says, insurance companies want to be notified that they are insuring an empty property because it represents a higher risk for them than one that’s occupied.

“There are two concerns for an executor,” Herd explains. “One, is whether the house is still insured. The executor then has an obligation to tell the insurer that it’s unoccupied. A lot of the executors don’t understand that.

“But there’s a broader obligation on an executor to ensure that all of the assets of the estate are insured – not just a home. Anything else you can insure needs to be insured, because the estate’s not going to be distributed for some time. So, in the meantime, the executor is responsible for preserving the estate and not putting it at risk.”

The potential liabilities don’t end there for executors. The laws in each state and territory differ slightly but in general, if there’s an error in the administration of an estate, the executive can be held personally liable, whether the error was accidental or deliberate.

For example, information supplied by the Public Trustee of Queensland says that “there have been instances where assets have been damaged due to fire or theft and it’s discovered the insurance premiums were not paid by the executor on time even though there was money in the estate to cover the bill at the time of administration”. The trustee goes on to point out that in such cases, the executor is personally liable for the asset.

Executors should also be aware that they can be held personally liable for what they pay out of the estate in the months immediately following the person’s death. Each state and territory’s threshold for challenges to a will may differ slightly, but six months is the norm.

How to choose an executor

According to Herd, most people want to appoint their children as executor – but it really depends on the dynamics in your family as to whether this is a wise move.

In a family unit where there is disharmony and tension, the last thing you may want to do is force your children to work together to administer your estate. In this case, you may look at nominating a trusted friend, solicitor or your state or territory’s public trustee instead.

Another consideration when choosing your executor is whether there may be conflict between that person and your beneficiaries. If, for example, you have re-married and nominate your new spouse as your executor, your adult children may object and make it difficult for your spouse to manage your estate.

And even if you nominate your spouse or other family members to be your executor, and they’re happy to accept the role while you’re alive, their feelings may change when they’re dealing with the grief of your death along with the complexities of winding up your affairs.

Ultimately, they may decide they don’t want to do it, Herd cautions, and a situation in which an executor declines to fulfil their role can cause delays to the estate management process.

“What that means is, someone needs to come forward to replace you [as executor],” Herd says. “You might ask someone to do that if you want to get out of being an executor, but it’s up to them as to whether they want to do it. They could be a solicitor, it could be the public trustee, it could be a member of the family, it could be anyone.”

Appointing a new executor must be done through the courts, which can cause delays in accessing funds to pay for a funeral, bills or other expenses related to the estate.

Some people choose to nominate multiple joint executors, while others nominate a primary executor as well as a back-up such as the public trustee, should family members may not be able to take on the executorship.

How much a professional executor costs

One of the benefits in nominating your children or a trusted friend to be your executor is that they’re unlikely to charge for their time, whereas a solicitor or the public trustee will charge, with the funds coming out of your estate. The charges can be in the form of an hourly rate, a percentage of the value of the estate or a fixed fee.

“Every estate has issues, so to apply a standard cost could be difficult,” Herd says.

If you are going to engage a third-party as your executor, be sure to understand any upfront and ongoing fees they’ll charge to manage your affairs.

Talking about your end-of-life plans

While none of us want to dwell too much on our own mortality, having conversations about your plans for your funeral and estate with loved ones and executors, and getting your affairs in order in advance, can ease the bereavement experience for those you leave behind.

There are many no-cost information sources designed to help you with the process. Westpac, for example, offers a new range of resources and checklists that aren’t specific to the bank’s customers.

“We’re really trying to highlight the conversation and support people with ways, checklists and tools in order for them to begin to plan,” Felicity Duffy, head of segments at Westpac, says of the helpful guides.

“We’ve got a step-by-step guide on end-of-life planning to help to get those conversations started. There’s one thing we can be sure of – we’re going to be born and we’re going to die – but we do really struggle to talk about it.”

Have you been an executor? What was your experience of the role?

Dealing with bereavement and the management of a Deceased Estate is a difficult time. We are here to help.