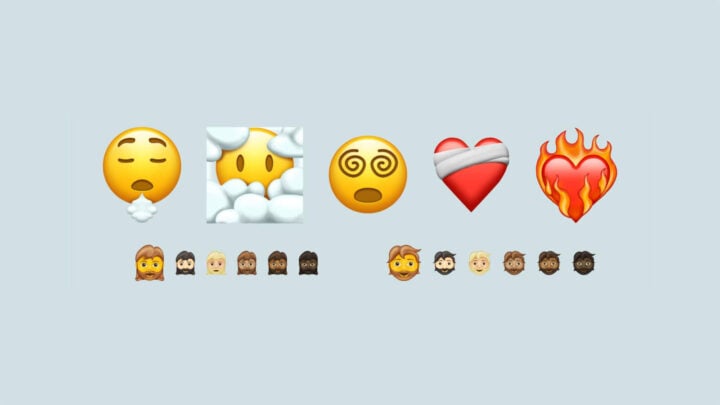 Did you know, once a year, every year, everyone gets an updated set of emojis on their phone? They typically come as part of a wider software update by Apple or Samsung for your phone or tablet, but they’re actually created and decided upon by a non-profit organisation called the Unicode Consortium, which works to ensure all languages are depicted accurately.

Emojis have been kicking around since the 1990s, but Unicode’s popular versions have only been with us since 2009. The number of new emojis released changes each year. In 2020, Unicode added just 117, while this year, 217 new emojis were included in the update, and yes, you should have the latest set by now (as long as you installed your device’s recent software update).

In the past decade, there have been significant changes, with – for example – same-sex couples added in 2012, five new skin tones added in 2015 (instead of just yellow), and male and female options for emojis such as astronauts and teachers added in 2016. In 2017, older adult/person emojis were introduced, along with more country flags, while 2018 saw the addition of a bald head for men and women, as well as white-haired men and women.

In 2018, Apple applied to the Unicode Consortium for the addition of accessibility features, such as a person with a white cane, a guide dog with harness, people in wheelchairs and an ear with a hearing aid. These were added in 2019, along with gender-neutral human options.

In 2020, Unicode introduced a woman in a tuxedo, man in a bridal veil, the transgender flag, trans symbol, anatomical body parts (such as a heart and lungs) and a headstone. On a lighter note, it also brought in a magic wand, roller skates, ninjas, parents feeding a baby, new animals (such as the polar bear, beaver and black cat), new food (including fondue) and new drinks (such as bubble tea).

The latest update includes mixed-skin tones for mixed-race couples, and men, women and a gender-neutral person with a beard. On the lighter side, there’s also a face in the clouds (use this to represent brain fog, confusion, or a sense of bliss), a face with spiral eyes (use this for hypnosis, dizziness or disorientation) and a face exhaling (use this for relief, exhaustion, or as a sigh of disappointment or displeasure). There’s also a heart with a bandage around it (this represents healing) and heart on fire (when you want to convey passion or lust).

Whether these new emojis face rejection or fame is up to all of us – the users – and how they will be interpreted will be even more fun to discover. After all, the peach quickly became known as butt cheeks, the eggplant – which debuted in 2010 – became code for penis, while the sweat droplets, well, you get the drift! But, thanks to emojis, communicating when there’s a language barrier just keeps getting easier.

Below are some of the new mixed-race couple emojis for 2021:

What do you think of the new emojis for this year? Which one do you currently use the most?