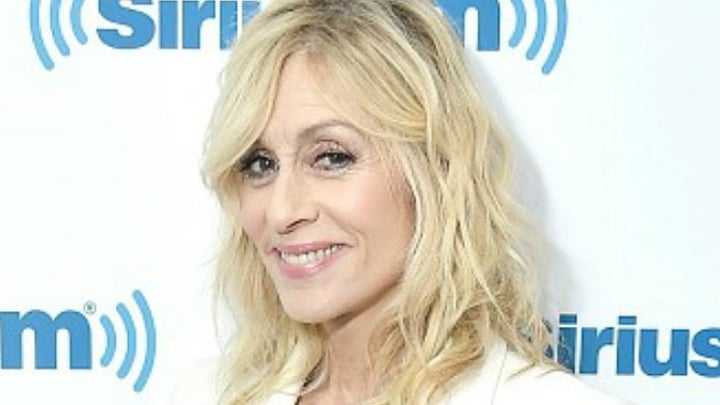 Judith, who starred as Angela Bower in the much-loved sitcom Who’s the Boss?, alongside Tony Danza, was spotted out and about in an eye-catching suit on Wednesday in New York City, revealing her stylish transformation over the years. The star stunned in the standout white power suit as she visited SiriusXM Studios, looking every bit the leading lady she is.

Fashion is a fickle game and history has taught us it’s only a matter of time before what’s old is new again. That appears to be the case for one of the most iconic looks from the ’80s – shoulder pads – and we’ve got Judith to thank for its comeback.

Judith showed off her edgy style in the fitted blazer which featured ’80s-inspired shoulder pads and embroidered detail — a striking pattern that looked eye-catching without being too busy. She completed the look with matching slightly-flared suit trousers.

Standing tall, Judith chose to pair the ensemble with white stilettos, simple jewellery, and very natural looking makeup, which included a touch of blush and a soft pink lip. The talented actress wore her blonde locks down in loose waves for an effortlessly chic look.

Judith made name for herself in the ’80s after starring in the day time soap opera One Life to Live (1977-1983), which she won two consecutive Daytime Emmy Awards for Outstanding Lead Actress in a Drama Series.

However her signature role came in 1984 when she took on the role of power exec Angela Bower in the long-running ABC sitcom Who’s the Boss? (1984-1992). The popular series centres on a widowed ex-Major League Baseball player from Brooklyn who relocates a wealthy suburb with his daughter to become the housekeeper for a divorced advertising exec.

Judith later starred in many television films and short-lived series. Not giving up anytime soon, her latest role was starring as Shelly Pfefferman in the critically acclaimed comedy-drama series Transparent, which she received Golden Globe, Primetime Emmy, and Critics’ Choice Television Award nominations.

Are you a fan of Judith Light? Do you remember watching her on Who’s the Boss?