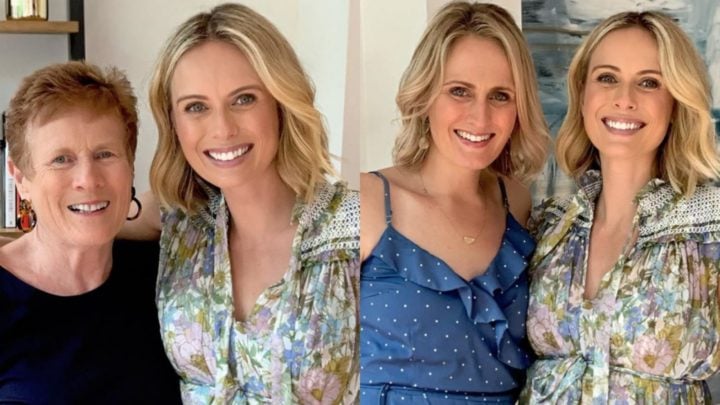 Sylvia Jeffreys showed off her growing baby bump in a beautiful floral dress as she held a glamorous baby shower on Saturday. The former Today presenter is expecting her first child with husband Peter Stefanovic in the coming months.

Sylvia shared a series of gorgeous snaps from the event. “Oh boy, our baby’s going to be in glorious company when he enters this world,” she wrote. “A beautiful day celebrating and showering our little guy. Thanks to my gang for all the love and belly rubs and CAKE.”

Oh boy, our baby’s going to be in glorious company when he enters this world. A beautiful day celebrating & showering our little guy. Thanks to my gang for all the love and belly rubs and CAKE 🍰🍰🍰 💙💙💙🎉🎉🎉

Cradling her stomach, the 33-year-old opted for a flowy maxi for the occasion, coordinated with a pair of nude, casual sandals.

Welcome to the family, kid 💙💙

Many fans were quick to comment on the photos, with one writing: “So happy for you both.”

Another added: “And what a fab family!! #luckyboy can’t wait to meet him!!”

While a third wrote: “So special! Enjoy the last few months.”

Sylvia and Peter announced the good news on Instagram in August, writing: “We’re having a baby boy and we’re totally over the moon!”

We’re having a baby boy and we’re totally over the moon!! 💫

Peter also shared a post on his Instagram, writing in the caption: “Soon to be a family of three and we are rapt! Good thing I’m already match fit with the whole no sleep thing.”

Many friends rushed to congratulate the couple at the time.

“About as over the moon as we all are!! What a lucky lucky bub he is. Huge congrats to two of the best. Now the fun really begins!!” former Today host Lisa Wilkinson wrote.

“How wonderful!!! Hearty congratulations…. and much love from me and V and all of us,” Richard Wilkins added.

The couple first met at Channel 9 in 2013. After getting engaged in mid-2016, Sylvia and Peter official tied the knot in April 2017 in a lavish ceremony in Kangaroo Valley, south of Sydney.

Speaking about her relationship with Peter, Sylvia previously told The Sydney Morning Herald: “I think it was pretty obvious, certainly was to everyone around me – my mum and my sister, in particular, knew that there was something there.”

Peter was still living in London and working as a foreign correspondent at the time, but instead of putting things on hold, he decided to woo Sylvia by writing her letters.

“We started pen-palling. It was old school and traditional,” she said. “To sit down and hand write a letter and post it to you – it doesn’t matter what’s in that letter – but that is a gesture in itself.”

Are you a fan of Sylvia Jeffreys?