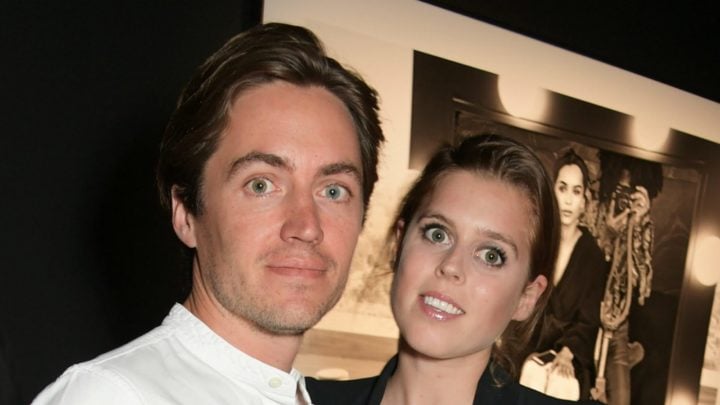 Princess Beatrice and her boyfriend Edoardo Mapelli Mozzi looked the perfect couple at a photography exhibition in London. Source: Getty

Princess Beatrice made a stylish appearance alongside her dapper boyfriend Edoardo Mapelli Mozzi at a photography exhibition this week, sporting a gorgeous bronze skirt and fashionable black jacket for the event in London.

The 30-year-old upped the fashion stakes on Wednesday evening in the gorgeous ensemble which she paired perfectly with delicate black heels and a shiny clutch in what was the second major outing for the royal couple this week.

Wearing her hair in a low ponytail, the young royal made her beautiful green eyes pop by adding a touch of bronzer to her cheeks and a soft pink lip. Meanwhile, her property developer boyfriend went for a more casual look for the Lenny Kravitz and Dom Perignon ‘Assemblage’ exhibition, wearing a white button-up grandad collar shirt and bottle green trousers.

The pair looked picture perfect together as they posed for snaps at the exhibition in London, with Beatrice cosying up closely to her boyfriend of nine-months. The black and white photographs on display featured candid portraits of Lenny Kravitz’s close friends and family including American fashion designer Alexander Wang, actress Susan Sarandon and Kravitz’s actress daughter Zoe.

It has been a busy week of engagements for the beautiful couple who were pictured the night prior making their way to upmarket restaurant Annabel’s in London.

Beatrice looked every inch the stylish star in a gorgeous black mini dress for dinner which she paired with the same black heels worn at Wednesday’s event and a mini blue leather bag. Wearing her hair down and straight, Prince Andrew’s daughter accessorised with a trendy headband.

While her businessman boyfriend — who goes by the name ‘Edo’ — was quite the fashionista as well, sporting a navy blue, slim cut suit with a coordinating white shirt and trainers.

Beatrice and Edo are said to have been introduced through mutual friends, according to Town & Country magazine, who reported that their relationship is growing “pretty serious”. According to the publication, Beatrice’s parents were friends with Mozzi’s late stepfather Christopher Shale, who worked in British politics prior to his death in 2011 at Glastonbury festival.

Are you a fan of Princess Beatrice? What do you think of her latest outfit choice?