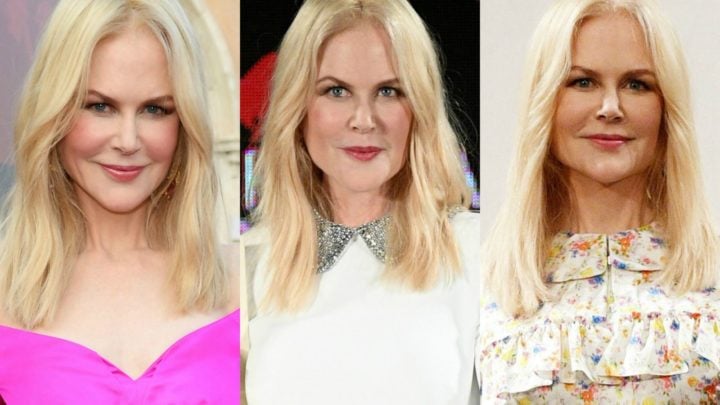 Nicole Kidman wowed onlookers this week by stepping out in three stunning outfits in one day to attend a series of events in Italy. Source: Getty

Nicole Kidman is known for her impeccable sense of style, and she wowed onlookers this week by stepping out in three stunning outfits in one day to attend a series of events in Italy.

Dressed to the nines, the award-winning actress stepped out in a fuchsia pink dress which featured a stylish off-shoulder neckline to attend the 65th Taormina Film Fest, which celebrates international cinema, on Monday afternoon.

Nicole, who has been married to country singer Keith Urban since 2006, completed the bold red carpet look with a simple red clutch bag, towering heels, minimal accessories, and wore her hair in tousled waves.

The Aussie-born beauty then slipped into a striking white gown which featured a dramatic thigh split and stylish high neckline while she was presented with the Taormina Arte Award. The prestigious award has previously been given to actors like Melanie Griffith, Russell Crowe and Richard Gere.

Paired with strappy black heels, the 51-year-old looked picture perfect for the event.

It was a very glamorous transformation for the actress after she was spotted just hours before in a floral maxi dress to attend a masterclass as part of the Taormina Film Fest.

Donning the maxi dress, which featured a chic tie-waist belt and ruffled sleeves, the mother-of-four paired the summery look with red ankle-strap heels.

Nicole’s glamorous appearance comes just a few days after she paid tribute to her husband on their anniversary with a sweet post on social media highlighting their wonderful years together.

The famous couple tied the knot back in 2006 in a beautiful ceremony in Manly on Sydney’s Northern Beaches. Since then they have welcomed two daughters together, Sunday and Faith, and enjoyed many special moments by each others sides.

The actress took to Instagram with a beautiful black and white snap of Keith planting a kiss on her forehead. The Big Little Lies star simply captioned the post: “…love. Happy Anniversary Baby.”

Fans were moved by the heartwarming post with many leaving congratulatory comments for the pair on their anniversary.

“You two are the sweetest,” one person commented on Instagram. “When two souls come together and bring out the wholeness in each other and ultimately unite with spirit, that union is true marriage between soul mates. This defines you both.”

Are you a fan of Nicole Kidman? Do you like her style?