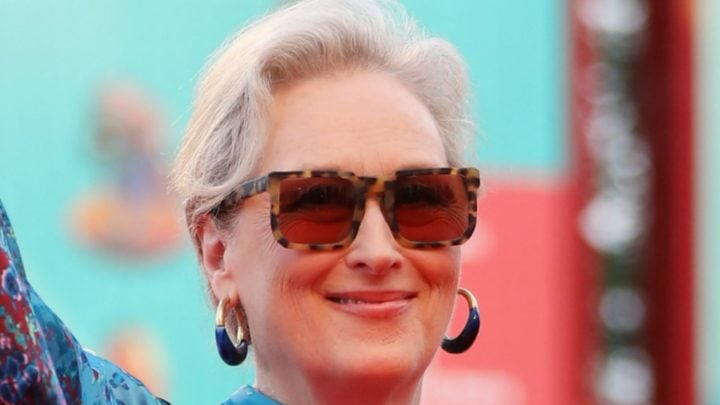 Meryl Streep wowed in a retro blue floor-length dress as she attended the premiere of her latest project The Laundromat at the Venice Film Festival in Italy on Sunday. Source: Getty

She’s known across the globe for her show-stopping acting abilities, but Meryl Streep is proving she’s quite the style icon too – something her Devil Wears Prada character Miranda Priestly would be proud of. The talented actress cut a stylish figure in a retro blue floor-length dress as she attended the premiere of her latest project The Laundromat at the Venice Film Festival in Italy on Sunday.

Taking inspiration from a few decades ago, the colourful number featured big puffy sleeves and a vintage high-neck design. Meanwhile, the flowing dress featured a beautiful multi-coloured floral pattern – a striking pattern that looked eye-catching without being busy in the way a more traditional floral fabric would’ve been.

The star, 70, paired the standout ensemble with a pair of red heels, statement gold and blue earrings, and also sported a pair of sunglasses at the event – looking every inch the leading lady that she is. Meryl also opted to keep her make-up minimal for the occasion and wore her blonde locks up in a stylish chignon.

Meanwhile, earlier in the day, the actress stepped out alongside the film’s director Steven and co-star Gary in a chic monochrome ensemble to attend a photocall for the film. For the occasion, she wore a white blouse with a stylish frilled collar and puffy sleeves, teamed with a pair of classic black slacks.

Meryl added a pair of matching blacks heels and accessorised with gold hoops. While she kept her make up simple and chic with a pop of pink lipstick, while her blonde hair hung loosely over her shoulders.

Meanwhile, Meryl’s latest glamorous appearance comes months after she stepped out alongside Aussie actress Nicole Kidman for a premiere in May. The two talented actresses exuded confidence as they posed for snaps at the Big Little Lies season two premiere in New York City, looking stunning in their gorgeous outfit choices.

Mamma Mia! star Meryl took a step away from her usual style choices in a beautiful long floral dress which flowed gracefully to the floor. The 70-year-old looked glowing in the frock, which she paired with a pair of simple black heels,

Meanwhile, Meryl opted to keep her blonde locks down and straight and added further pops of colour with a soft pink lip and a swipe of blush. She finished of the standout ensemble with black dangling earrings and stylish glasses.

Meryl completely transformed for her role in the second series of the hit TV show, as she plays Mary Louise Wright, the mother of Alexander Skarsgard’s character Perry, and mother-in-law to Nicole’s Celeste. Celeste was the victim of horrific domestic violence in the first series, before it ended with her on-screen husband’s death – which became central to the entire series as viewers tried to guess who had killed him.

And it comes after Meryl showed off her timeless elegance once again in some smart black trousers and a blue blouse with a statement bow-style attachment across the front at the 2019 Winter Television Critics Association earlier this year, which she attended alongside co-stars Reese Witherspoon, Laura Dern, Zoe Kravitz, Shailene Woodley and Nicole Kidman.

The star completed the classic look with sheer stockings and black heels, wearing her blonde hair tied back for the occasion. Meanwhile, she finished off the elegant ensemble with a pair of statement blue earrings – which added a colourful flair to the outfit.

Are you a fan of Meryl Streep? Do you like her style?