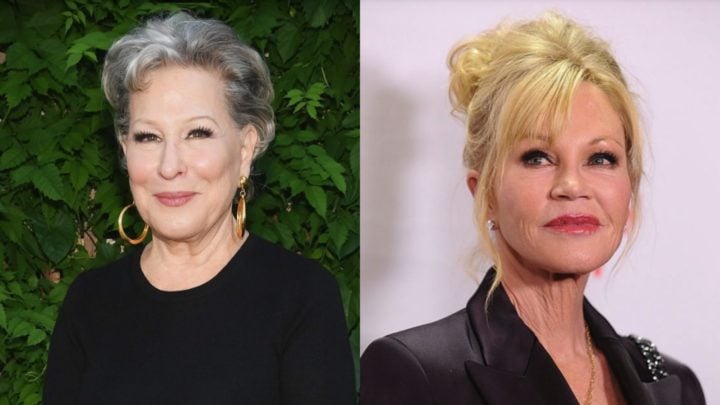 Melanie Griffith sent her fans wild just hours ago when she posted a smoking hot photo of her in her underwear, showing off her figure in a very confident pose in front of the mirror. And as she continues to get flooded with praise, fellow actress Bette Midler’s hilarious response is quickly going viral.

Griffith, 62, stripped down to black knickers and a matching bra for the sultry snap, while posing in some daring heels – all to help raise money for breast cancer research. She explained on the post that her two friends had set up the lingerie line, with a portion of sales going towards different charities each month.

And she was inundated with comments from her followers almost immediately, as one wrote: “This should [be] your new head shot,” while another added: “You must be super dedicated and work so hard to look so fit.”  And one more wrote: “She’s got a head for business and a bod for sin.”

She followed a stream of other stars posing in the line’s lingerie to promote the amazing cause. Griffith gave them a shoutout in her caption, writing: “So these 2 awesome, creative, incredibly chic [email protected] and @simoneharouche have started this amazing new lingerie line @thekitundergarments. I love everything they have made and btw want one of each! They also donate a portion of anything you buy to charity.”

And seeing the post, Midler has since joked on Twitter that she’d never (intentionally) have the confidence to do it herself, writing: “62 year-old Melanie Griffith posted a pic posing in underwear on Instagram & she looks amazing! If I ever do that, please know it’s because I can’t remember whether or not I’m dressed.”

It sparked some funny responses from like-minded people on the social media site, as one wrote: “I make sure my bra is UNDER my blouse before I leave the house i fear it’s just a matter of time I forget….” and one added: “You are a goddess. With a razor sharp sense of humor (sic). And a redhead – what could be bette-r?”

62 year-old Melanie Griffith posted a pic posing in underwear on Instagram & she looks amazing! If I ever do that, please know it’s because I can’t remember whether or not I’m dressed.

Griffith isn’t shy to strip down in front of the camera and several months ago she posted photos on holiday as she modelled a small black bikini alongside a close friend. Wearing a loose open black sarong over the top, the star looked incredible in the two-piece.

And in July she once again delighted fans as she posed for a very seductive shot in the same black bikini, this time lying down on her side with her head propped on her elbow. Wearing a black hat and sunglasses, the very natural photo showed the actress’ slim body on full display.

After turning 61 last year, Griffith joked she’s still “61 and sassy”. And marking the occasion in style, she also starred in her very own InStyle magazine spread. Editor-in-chief of the magazine Laura Brown personally asked Griffith to feature in the September issue.

“So my cool friend @laurabrown99 asked me to be in September issue of @instylemagazine and she also has the sweetness to have it come out today on my birthday,” Griffith gushed in an Instagram post at the time. Sharing a picture from the magazine, the Working Girl actress could be seen showing off her youthful appearance. The star wore her blonde locks in curls and modelled a black top that showed off her cleavage. She also wore a gorgeous red skirt that showed off her long legs and completed the look with a stunning pair of black heels.

The star also shared a beautiful bunch of flowers she was sent by friend Kris Jenner and took the chance to update fans of how life has been treating her since she turned 61. “After a 5 mile hike I’m gonna lay in the sun after smelling my birthday flowers from my bff [best friend forever] @krisjenner,” she said. “I am 61 and sassy.”

Would you feel confident posing in your underwear like this?