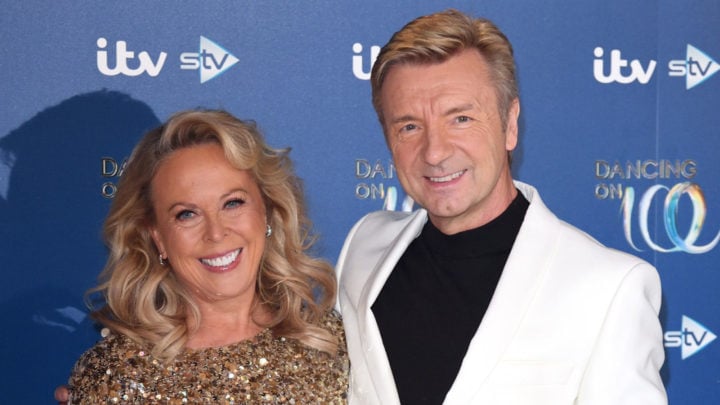 The Olympic gold medal winners stepped out for the launch of UK TV show Dancing on Ice. Source: Getty.

It has been 35 years since they dazzled the world with their show-stopping performance at the 1984 Winter Olympics in Sarajevo, taking home the gold medal with a perfect score after wowing the judges with their figure skating routine set to the tune of Ravel’s Bolero.

Over the years Jayne Torvill and Christopher Dean have remained firm friends, making regular public appearances together and acting as judges on hit UK television show Dancing on Ice, and they reunited once again on Monday as they stepped out in London.

Posing side by side on the red carpet, the iconic British duo smiled widely for the cameras as they attended the launch of the new series of Dancing on Ice, which is set to air in the UK in January 2020. Jayne, 62, put on a dazzling display at the event in London as she stole the limelight in a floor-length gold gown.

The figure-hugging frock showed off the skater’s figure perfectly and featured a daring thigh-high split up the left-hand side, as well as sophisticated cap sleeves. But it was the fact that every inch of the gown was embellished with gold sequins that really topped off Jayne’s red carpet look.

Meanwhile Chris, 61, looked dapper in a white tuxedo jacket which he paired with a plain black t-shirt and a pair of smart black suit trousers.

Torvill and Dean have been judges on the hit ice-skating show, which sees a host of celebrities paired with professional skaters as they learn new routines each week, since it launched back in 2006. The show ran until 2014 before being cancelled, however it returned to screens in 2018 and will celebrate its 20th season next year.

Huge names such as Bonnie Langford, Coleen Nolan, Bobby Davro and Pamela Anderson have taken part in the reality show over the years and this year will see the likes of comedian Michael Barrymore and talk show host Trisha Goddard take to the ice in a bid to take home the winner’s trophy.

Torvill and Dean have not yet confirmed whether they will take to the ice themselves during the upcoming series, having previously admitted that they now worry that every dance could be their last due to their ages, with both now being in their 60s.

However in previous seasons the duo have delighted viewers with their undeniable chemistry on the ice, including earlier this year when they performed to ‘Bridge Over Troubled Water’ during the series finale.

While more than three decades has passed since their gold medal winning performance, which catapulted them to stardom, the professional skaters proved they still have the moves on the ice as they pulled off a stunning series of lifts and jumps on the ice.

Do you remember watching Torvill and Dean's Bolero? Are you a fan of figure skating?