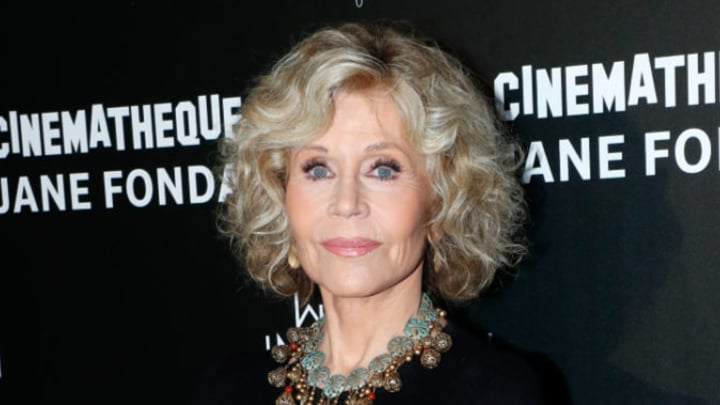 The Grace and Frankie star is currently in Paris. Source: Getty.

Jane Fonda has proven that even the simplest of outfits can still look amazing, as she stepped out in a pair of funky green pants and a skin-tight black sweater for an event in Paris on Monday.

Highlighting her fabulous fashion sense, the Grace and Frankie actress dazzled in the emerald green trousers and casual sweater combo, which showed off her fabulous slim figure.

Attending the Kering Women in Motion Master Class, at Cinematheque Francaise in France, Jane spruced up the outfit with an elaborate green and gold necklace and a classic pair of black suede boots.

The 80-year-old looked every inch the star as she posed for photos at the event, her beautiful features highlighted with a soft pink lip, swipe of blush and lashings of dark mascara. Meanwhile, the actress chose to wear her blonde locks down in her usual style, with soft waves framing her face.

Jane has been spotted a number of times in Paris over the past few days, as she attended the Festival Lumière. Proving that age is just a number, the actress looked effortlessly chic in a tightly fitting leopard print dress for the event on Friday night.

Tight in all the right places, the dress showed off Fonda’s small waist and stunning curves as it draped elegantly to the floor.

Jane, who was the recipient of the coveted Lumière Award at this year’s event, stood tall in simple silver pumps, while she paired the dress with a chunky gold necklace and gold hoop earrings.

As for her makeup, the actress went for a soft pink lip, a touch of blush to highlight her cheeks and dark mascara and eyeliner. Earlier that day, the actress went full retro for a master class with the Institut Lumiere director and Cannes chief Thierry Frémaux.

The Hollywood star chose a 1970s inspired outfit with a seriously cool pair of patterned, green flares, which she matched with a sleek green sweater and a beaded necklace.

Jane, who is fluent in French, addressed the audience in their native language and had the crowd in stitches as she regaled her career and life in the spotlight.

According to Variety, the Book Club star spoke at length about her political activism, including her controversial 1972 trip to Vietnam that earned her the nickname ‘Hanoi Jane’.

“It helps to be in popular culture when you’re a militant, so I want to continue to be very popular in my work so that I can do better militancy,” she said to loud applause.’

What do you think of Jane Fonda’s latest outfit choice?