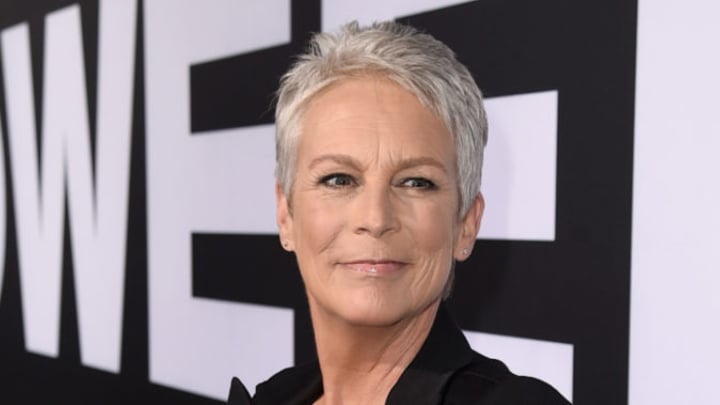 Jamie Lee Curtis steps out in a busty jumpsuit for the premiere of her latest film. Source: Getty

Jamie Lee Curtis certainly wasn’t shy in showing off her fabulous figure as she stepped out in a sexy black jumpsuit for the premiere of her latest movie on Wednesday night.

Strutting her stuff down the runway, the 59-year-old put on a busty display with the low-cut figure hugging outfit fitting in at all the right places. Enjoying a night out for the launch of the frightening thriller Halloween in Hollywood, the Trading Places actress looked glamorous as she headed towards the TCL Chinese Theatre in sky high black pumps.

Waving at press as she passed by the daughter of Hollywood golden couple Tony Curtis and Janet Leigh showed off her slim figure as she paired the stunning outfit with a simple, cropped black jacket.

Opting for her usual cropped hairstyle, Curtis chose a beautiful silver bangle and small silver studs to match with the jumpsuit and a chunky watch. Meanwhile, she kept her makeup to a minimum going for a soft pink lip, dark mascara and a touch of bronzer to highlight her cheekbones.

The much-anticipated film Halloween, is a sequel to the 1978 movie of the same name with Curtis and fellow actor Nick Castle reprising their roles of Laurie Strode and Michael Myers.

Set 40 years after the original, the latest film follows the story of Laurie as she prepares to face Myers as he returns to the town of Haddonfield in Illinois to finish off his killing spree. In the 1978 classic, Laurie was able to escape the grips of Myers, becoming the sole survivor of the serial killer.

Earlier this month the actress was spotted celebrating the premiere in Germany in an elegant little black dress. Curtis showed off her edgy style with a pair of statement black boots and matching tights, as she accessorised with a simple silver pendant necklace.

She wore her short white locks in her signature cropped style. In Halloween – which is due to be released next week – Jamie sports shoulder length hair. Still, it seems as though Jamie can’t wait for fans to see the latest film.

“40 years goes by in a flash or shall I say, a slash,” she joked on Instagram.

What do you think of Jamie Lee Curtis’ latest look? Do you plan on going to see her latest movie?