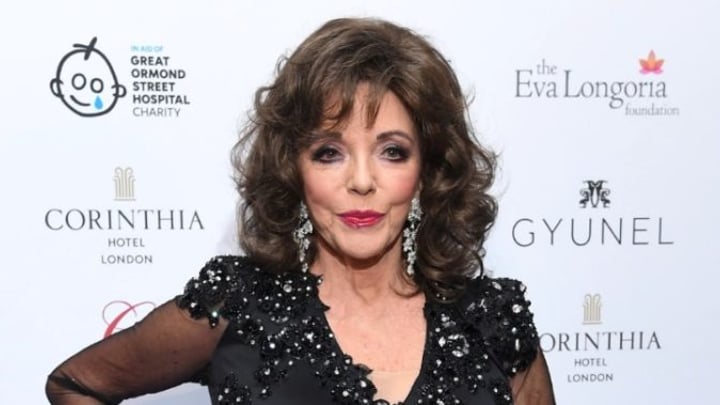 She’s known for her incredible style and youthful appearance, but Joan Collins has dropped her glitzy outfits and classic bouffant in a dramatic transformation, revealing what she could look like without the Hollywood makeover.

The 85-year-old actress has dropped her glamour and appeared almost unrecognisable in a new photo of her on set, as she takes on the role of a lonely widow in new movie Gerry, which recently premiered at the LA Shorts International Film Festival.

The photo shows her in character wearing a loose knitted cardigan and shawl, while sat in a nursing home with a miserable plate of peas in front of her. The incredible make-up team have added lines to her face, before swapping her usually freshly blow-dried wigs for a shorter brunette do.

She will play Hilda in the movie, who is grieving the loss of her late husband and facing another Christmas alone in the nursing home she now lives in.

According to the Mirror, Joan had to wear prosthetics to pull off the slightly more frail character.

Meanwhile, the film’s official Instagram page shared a second photo of her in character, this time staring off into the distance from an arm chair. A moving caption praised the actress for her incredible performance.

“So much said in just one photo. @joancollinsdbe is extraordinary in this role! She portrays the character with such a delicate touch & with real dignity and grace – an outstanding performance which will have you transfixed by her performance and leave you wanting more… #Gerry a film that gently touches on very real issues of today #isolation #loneliness #death #life and #love ….” the film crew wrote.

Joan has always denied having surgery, and puts her youthful appearance down to her healthy lifestyle and trusty moisturisers.

“If people want to think I’ve had surgery, then…” she previously told The Sun. “You can tell [I haven’t] because I have lines and jowls. When I see women around my age I think, ‘Oh, really? My gosh, I look quite a bit…’ I think I look pretty good!”

What are your beauty secrets? Are you a fan of Joan Collins?