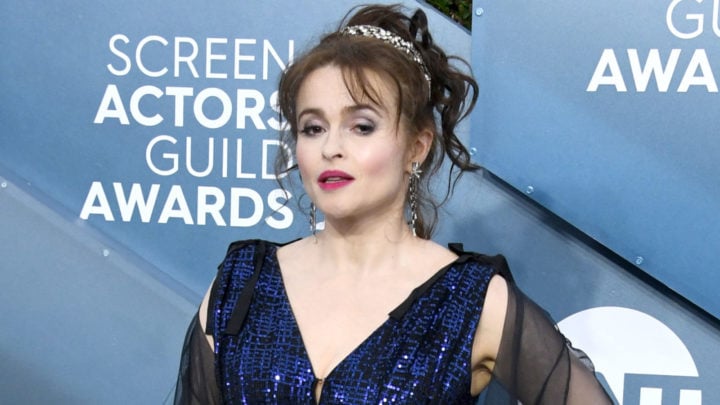 She is known for her quirky sense of style and Helena Bonham Carter pulled out all the stops on Sunday as she attended the Screen Actors Guild (SAG) Awards in Los Angeles.

The 53-year-old actress is up for an award at the event, which is just getting underway in the US, for her role as Princess Margaret in hit Netflix series The Crown. But if there was an award for show-stopping fashion, Helena would surely be a shoo-in for the gong.

The Harry Potter star dazzled on the silver carpet at the star-studded event in a striking cobalt blue sequinned frock, which featured a layered skirt and a wide black satin band around the waist, which showed off the star’s figure. She then added a sheer chiffon bolero and a sparkling jewelled headband, with a lick of bright pink lipstick.

Never one to blend into the background though, the British acting legend finished off the look with a pair of towering platform heeled shoes in black velvet, which featured a dazzling diamante design.

Helena added an extra touch of glamour to her look as she donned a pair of oversized jewel-encrusted sunglasses as she posed for photographs, while she even coordinated her nail polish with her dress as both her fingers and toes had been painted in a bright shade of blue.

The Oscar nominated star has been nominated in the category of ‘Outstanding performance by a female actor in a drama series’ for her stint in The Crown, having joined the cast in season three and taken over the role of Princess Margaret from young British star Vanessa Kirby.

Helena is up against her co-star Olivia Colman, who won a Golden Globe earlier this month for her role as Her Majesty the Queen in The Crown, as well as The Morning Show’s Jennifer Aniston, Jodie Comer for Killing Eve and Elisabeth Moss for The Handmaid’s Tale.

Helena’s transformation into royalty sparked a social media frenzy last year when Netflix unveiled the first image of her in costume. The photograph, simply captioned ‘Hope’, showed the actress in character and holding a lit cigarette in her left hand.

Fans were quick to comment, congratulating Carter on her new role. “I can’t wait to see Helena’s performance as Margaret. She’ll do Vanessa Kirby proud,” one commentator wrote. Another added: “Helena Bonham Carter is my favourite”.

The British actress, best known for her roles in The King’s Speech and the Harry Potter franchise, spoke about her excitement at playing Princess Margaret when her casting was first announced back in April last year. She said: “I’m not sure which I’m more terrified about — doing justice to the real Princess Margaret or following in the shoes of Vanessa Kirby’s Princess Margaret. The only thing I can guarantee is that I’ll be shorter than Vanessa.”

Are you a fan of Helena Bonham Carter? What do you think of her sense of style?