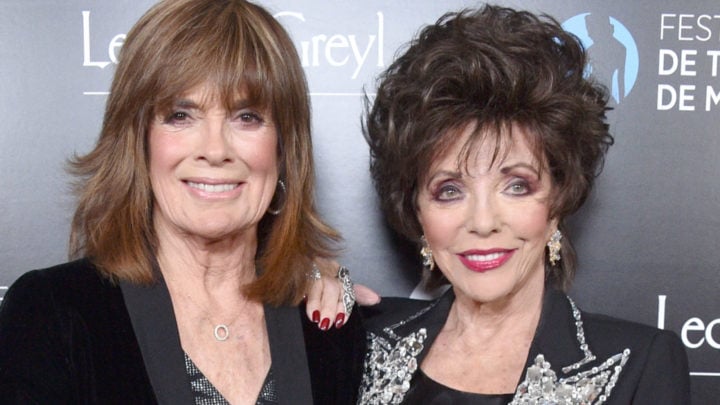 Linda is best known for her role on Dallas, while Joan is loved by fans for her iconic part in Dynasty. Source: Getty.

They were two of the biggest television stars of the 1980s, with long-standing roles on hit soap operas Dallas and Dynasty, and Linda Gray and Dame Joan Collins looked as sensational as ever as they stepped out in California this week.

The iconic pair attended the 60th Anniversary party for the Monte-Carlo TV Festival on Wednesday alongside a host of other stars including Bond girl Jane Seymour and Priscilla Presley. The event was hosted by Prince Albert II of Monaco at the Sunset Tower Hotel in West Hollywood.

Joan looked incredible in an all-black outfit as she slipped into a satin knee-length dress which featured a ruffle design around the hem and neckline. Joan dressed up the simple frock with a matching cropped jacket which featured silver rhinestone embellishments on the lapels and around the edge of the wide collar.

She completed the glamorous look with a pair of pointed stiletto-heeled shoes, which were adorned with a silver bow on each toe, and an elaborate pair of fishnet-style stockings. And, in her usual style, she added plenty of sparkle with a pair of diamond earrings and several oversized rings on each hand.

The 82-year-old screen icon is best remembered for her role as Alexis Carrington Colby on Dynasty, between 1981 and 1989, whose constant scheming against ex-husband Blake Carrington formed the basis of much of the show’s drama.

Linda opted to follow the same colour scheme for the star-studded event and stepped out in a pair of classic black slacks which she paired with a black wrap top which featured a silver animal print pattern.

The 79-year-old, who played J.R’s wife Sue Ellen Ewing on Dallas for an incredible 11 years, finished the elegant ensemble with a tuxedo-style velvet jacket, with a contrasting lapel, which tied in a subtle bow at the front. She added an extra touch of glamour with a quilted black and silver handbag and a simple diamond necklace.

Also in attendance at the event was Live and Let Die star Jane Seymour who looked stylish in a black midi-length pencil dress, which she paired with opaque black stockings and a pair of lace-up black stiletto-heeled shoes.

The 68-year-old British star added a touch of elegance to her ensemble with a silk white kimono-style blazer and a statement silver necklace, while her make-up was flawless and her copper-toned locks fell in loose curls over her shoulders in her usual understated style.

The event was held to mark the 60th anniversary of the Monte-Carlo Television Festival, which takes place each June at the Grimaldi Forum in the Principality of Monaco.

Were you a fan of Dallas or Dynasty?