Catherine Zeta-Jones is ravishing in red alongside glamorous lookalike daughter 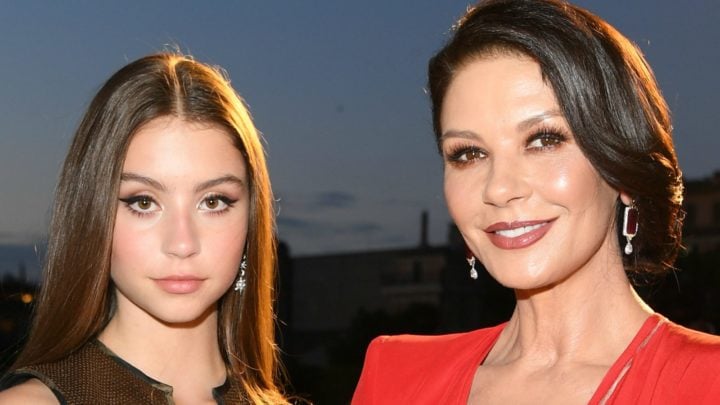 Catherine Zeta Jones and her daughter Carys made a rare joint appearance as they attended the Fendi fashion show in Rome, Italy. Source: Getty

Catherine Zeta-Jones’ lookalike daughter Carys has followed in her mother’s footsteps when it comes to stealing the spotlight – and she really made a statement as she stepped out with the famous actress in Rome on Thursday.

The fashionable pair made a rare joint appearance as they attended the Fendi fashion show at the Colosseum, and there’s no denying Carys bears more than a passing resemblance to her glamorous mother.

The teenager, 16, who’s also a model, looked picture perfect in a slightly sheer brown dress which featured a stylish front split for the star-studded event. Letting her shiny locks fall loose down her shoulders, she completed her look with dramatic cat eye makeup, a stunning brown and gold bag, and two-toned heels.

Meanwhile Catherine, 49, put on a striking display in a long-sleeved red dress which featured a plunging neckline and dramatic shoulder pads. Wearing her brunette locks style in an elegant up-do, the Chicago actress completed the standout look with a pair of nude heels and a beaded clutch bag.

American actress Susan Sarandon was also in attendance, sporting a sheer frock which featured a colourful orange and red pattern and cut-out shoulder detailing. The 72-year-old actress certainly turned heads at the event as she accessorised with pair of trendy sunnies, bright earrings and she wore her beautiful red locks styled in soft waves.

The mother-daughter duo only make rare public appearances together, but they were snapped in February this year at another fashion show in New York.

Attending the Michael Kors show at New York Fashion Week alongside Carys’ father Michael Douglas, 74, the family beamed as they posed alongside each other for photos after the models had taken to the stage.

Standing between her famous parents, Carys looked the image of her mother with her dark locks hanging in loose curls. The teenager donned a pair of ’70s-style flared jeans, paired with a white crop top and colourful snake-skin effect jacket.

Catherine oozed sophistication in a tight-fitting maroon wrap dress, which showed off her famous curves perfectly. She finished the look with a pair of studded tan heels and a matching clutch bag. While Basic Instinct star Michael looked dapper in a navy suit, wearing the jacket open with a sweater underneath and no tie.

Do you think Carys looks like her mother? Are you a fan of Catherine Zeta-Jones?