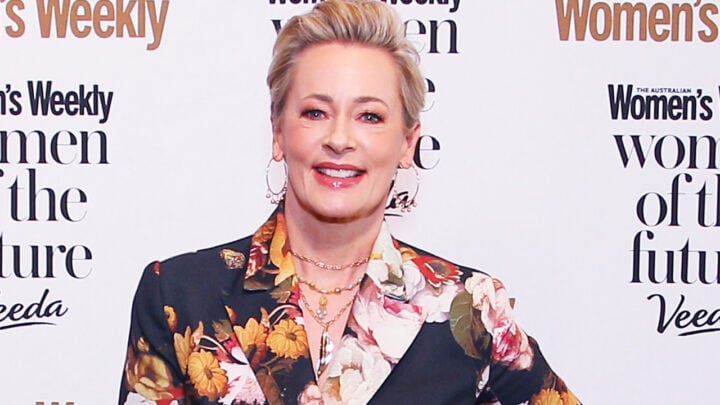 Amanda Keller didn't hold back at this year's Women of the Future Awards in Sydney. Source: Getty.

Australian television presenter Amanda Keller pulled out all the fashion stops on Thursday as she stepped out for the Women of the Future Awards in Sydney. The 58-year-old opted for a glamorous floral pantsuit for the event, which celebrates the achievements of young women who are making a difference.

Amanda showed off her quirky style in the suit, which featured a tailored blazer and matching flared wide-leg pants. The Living Room host completed the look with black shoes, a chunky gold ring, an assortment of necklaces and hoop earrings. Beauty-wise she wore her signature cropped blonde hair slicked back and opted for soft, peachy make-up tones.

Studio 10’s Sarah Harris, 39, was also in attendance sporting a beautiful navy-blue high-neck dress, which cinched in at the waist with a tie belt and featured a low back. She accessorised with nude strappy heels and a matching navy-blue clutch, and opted for minimal jewellery.

Meanwhile, Australian journalist Jessica Rowe, 50, wore an eye-catching frilled skirt and blouse for the event, tying the colourful outfit together with a pair of red stilettos — now that’s one way to make a statement!

Taking to Instagram in October to break the news, she wrote, “Sad to hear Dancing With The Stars won’t be returning next year. I had an absolute ball hosting this with @grantdenyer. Proud of how we put our best sequinned feet forward to carry on as the pandemic hit. What a ride!!! Thanks to all who tangoed with us.”

She shared the message alongside a picture of herself and co-host Grant Denyer on set. The reality show originally aired on Channel 7 from 2004 to 2015, before moving to Channel 10 in 2019 with Amanda and Grant acting as hosts.

Are you a fan of Amanda Keller? Do you like her style?