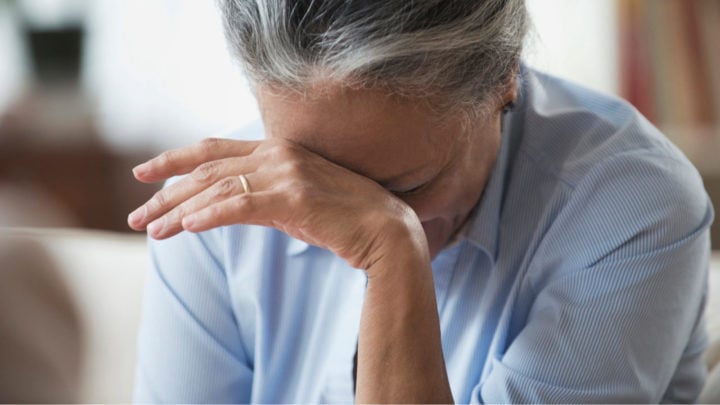 After years of marriage you’d think you’d know every little thing about your loved one, but a heartbroken woman has learnt the hard way that’s not always the case, after discovering her husband had been hiding away some secrets online.

Writing to The Guardian‘s Private Lives section for help, the 70-year-old explained how she had discovered her husband had been watching pornography and had searched images of women in underwear online. While everyone faces difficulties throughout their relationship, and times of hardship, the woman’s situation has brought her to a cross road as she considers if she can put it behind her for good.

Questioning how strong their relationship is after 48 years of marriage and doubting her husband’s attraction to her, the woman, who did not disclose her name, explained she was “utterly devastated” and unable to confide in her friends and family about the discovery. “I used to feel adored,” she began. “My husband used to say that when he thought of sex, it was always with me.

“We have been married for 48 years. I am 70, he is 72. Quite by accident, I discovered my husband watches pornography and searches online for women in underwear to ogle.”

Still coming to terms with the find, the wife said while she thought her husband had just become disinterested in sex altogether, it turns out that isn’t exactly the case.

The whole situation has left her feeling hurt and betrayed and the woman explained she would never dream of looking outside her marriage. “By the same token, given his age, I could feel the same,” she added. “But I don’t. I feel betrayed, hurt, old and ugly.” Adding: “We have a close family who would be torn apart if we were to split up. I don’t want to confide in my friends. I don’t know how to get over this.”

“Why not have a chat with him?” one person replied. “Maybe tell him you stumbled upon this by chance and that you feel hurt and want to understand what this means to him? It sounds like you’ve had an amazing relationship all these years so I really hope you find a positive way forward. He’s still the same man and chances are he still loves you dearly.”

While the woman’s situation is hurtful she is not alone in her struggles with another wife claiming her husband has taken it to another level by actually cheating on her. Also reaching out to The Guardian‘s Private Lives section for help and guidance, the devastated wife said while she thought she was in a stable marriage, unfortunately, she was wrong.

The woman, who also remained unnamed, explained she had found out her husband had been involved with another woman for many years. “I have been with my husband for 32 years and thought our marriage was happy and solid,” she began.

“10 weeks ago, a woman contacted me and said she was in a relationship with him. He had told her he was separated. I am heartbroken and so are our adult daughters. I now know adultery has been a way of life for him for 25 years.”

However, that isn’t the end of it either with the woman explaining that her husband still claims to love her and is actually dealing with a sex addiction which has led him down the path of adultery. Unsure of what to do next she asked if that is something that can be cured and if it is worth holding on hope that their relationship can withstand the cheating scandal.

“He says he has always loved me and does now more than ever,” the wife continued. “I still love him and am terrified of walking away. He believes he is a sex addict and is seeing a therapist (but not one who specifically works with sex addiction).”

Unfortunately for this woman many claimed it sounded as if her husband was in a relationship with the other woman and it wasn’t just based on sex. Most questioned whether he’d be able to change after such a long time cheating and advised her to think about the situation seriously before making any rash decisions.

“I think you need to ask yourself how you can recover from this,” someone suggested. “You need time to process this and your priority should be yourself and not him. The fact that he seems to be relationship with other women rather than just having casual sex, sets off alarm bells to me.”

Another said: “I’m so sorry, but I think if he’s been deceiving you this long, he won’t stop. Sex addiction as an excuse is flimsy – everyone has a choice about how to behave.” However, a third held the opposite view writing: “Every marriage is different and operates on its own terms. If you can accept this and move on, all power to you.”

What do you think of looking at images and pornography online? Is it a deal breaker or acceptable?