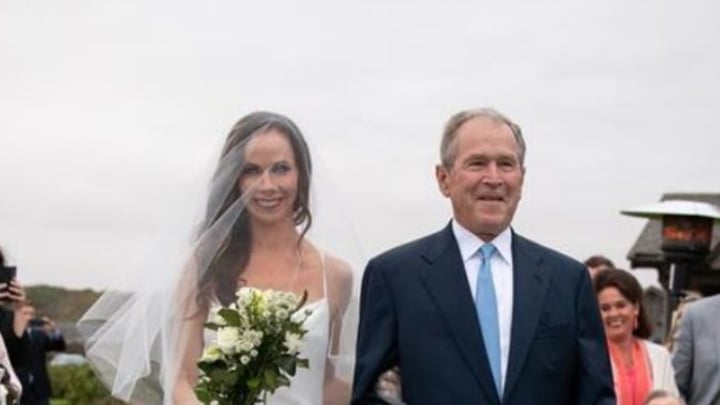 Former president George W. Bush has revealed his daughter Barbara got married over the weekend, sharing a proud photo of himself walking her down the aisle. Source: Instagram.com/georgewbush

He was once the most powerful man in the world, but perhaps one of George W. Bush’s proudest moments occurred over the weekend.

The 43rd president of the United States took to Instagram overnight to announce that his 36-year-old daughter Barbara Pierce Bush had married her long-term partner Craig Louis Coyne in a private ceremony. While she could have had her pick of glamorous wedding venues, Barbara opted for a quiet wedding in Maine so her beloved grandfather and former US president George H. W. Bush could be involved.

She wore her brown locks in lose curls for her big day and held a stunning bouquet of flowers. In the photo, Barbara’s grandfather, 94, can be seen watching on lovingly from a wheel chair, while mother of the bride Laura Bush was the picture of elegance in a blue-and-white dress.

“Barbara is named for a unique and strong woman – and rightly so, because she is unique and strong,” Bush captioned the photo. “Laura and I are so proud of our compassionate, daring, fierce, kind, intelligent, loving daughter. And we’re thrilled to welcome Craig Coyne to our family.”

Further photos of the big day were shared on Twitter by Jennifer Pickens, a White House East Wing traditions and social event historian.

“Congratulations to Former First Daughter, Barbara Bush on her wedding to Craig Coyne yesterday at the Bush family second home, Kennebunkport, Maine,” she wrote. “The private wedding was confirmed on social media by her parents and twin sister.”

Congratulations to Former First Daughter, Barbara Bush on her wedding to Craig Coyne yesterday at the Bush family second home, Kennebunkport, Maine. The private wedding was confirmed on social media by her parents and twin sister. Photos by former WH photog @PaulMorsePhoto pic.twitter.com/3UsxRlHDbp

In one photo, the entire family could be seen posing happily for a photo. In another, Barbara could be seen sharing a sweet embrace with her twin sister Jenna. Jenna phoned in to America’s Today show on Monday where she revealed she was still crying tears of joy 24 hours after watching her sister tie the knot.

“There were so many happy tears,” she explained. “They wanted to get married here [in Maine] because my grandfather’s here, so it was a very secret wedding.”

Sounding emotional on the phone, Jenna also revealed exactly what she said during a toast to her sister during the big day and the touching gesture for her recently deceased grandmother, Barbara, after whom her sister is named.

“It’s hard to articulate how much I love her because it’s 37 years of love, but I just told her and everybody how much she means to me,” she said. “But I ended actually with a letter that my grandfather wrote my grandmother, because I searched all the romantics and Shakespeare and it just wasn’t doing it.”

Read more: George Bush opens up about his relationship with Michelle Obama

During the emotional toast, her grandfather was standing right beside her. Jenna also explained that her sister’s “something borrowed” was a bracelet Bush Senior gave to her grandmother on their 70th wedding anniversary. Barbara Bush died at the age of 92 in April, leaving behind her husband, five children, 17 grandchildren and seven great-grandchildren.

Meanwhile, photographer Morse also shared a photo of the newlywed couple on Instagram shortly after they were pronounced husband and wife.

Do you remember when your own children got married? Do you have a message for the Bush family?