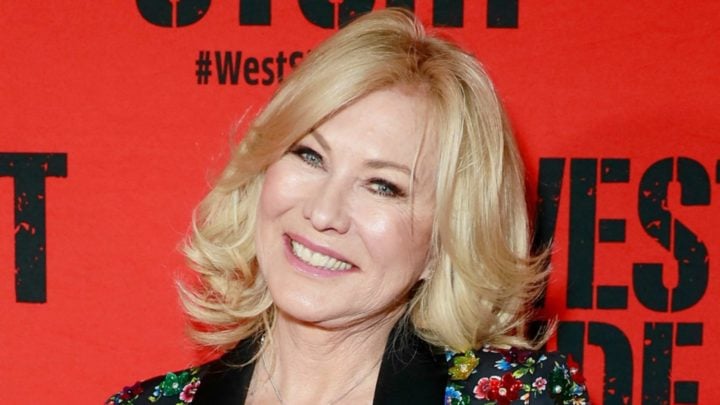 Kerri-Anne Kennerley flashed a beaming smile at the opening night of West Side Story in Sydney. Source: Getty.

She’s been front and centre of Australia’s entertainment scene for decades and Kerri-Anne Kennerley proved she’s still a leading lady in front of the cameras on Tuesday night, as she stole the show at a star-studded event in Sydney.

The Studio 10 star, 65, turned back time in a retro-style outfit, ensuring all eyes were on her as she flashed a beaming smile and posed up a storm in front of the camera. Wearing a bedazzled and multi-coloured floral jacket, matched with wide flared black pants, she successfully channelled classic ’70s vibes for the bash.

Kerri-Anne was one of several Aussie household names celebrating the opening night of ‘West Side Story’, while joining the likes of Melissa Doyle and The Morning Show‘s Larry Emdur, who shared a loving display with his wife Sylvie.

Wearing her short blonde bob in soft waves over her shoulders, Kerri-Anne appeared in great spirits as she smiled and posed on the red carpet – a complete natural in front of the camera.

Joining her was Sunday Night host Melissa Doyle, 49, who changed up the style at the event in a classic patterned black dress with cut-out bat-wing sleeves. She towered for photos in black strappy stilettos and wore her hair loose and straight in a short bob style.

And putting on a very loved up display was Larry Emdur and wife Sylvie, with the TV star, 54, sharing a loving look with his other half in front of the cameras. While he opted for a smart black suit, his wife looked incredible in a black dress and sparkly long jacket.

And while Kerri-Anne led the style at the event in a ’70s-inspired outfit, it comes just days after she channelled her inner ’80s diva in a vibrant floral power suit on Friday. Kerri-Anne wowed crowds in the standout outfit, looking every bit the leading lady that she is.

The Studio 10 presenter showed off her quirky style in the fitted blazer which featured an asymmetrical hemline, eye-catching floral pattern and 1980s-inspired shoulder pads. She completed the look with matching suit trousers and a purple top.

Standing tall, Kerri-Anne chose to pair the ensemble with red statement heels and very natural looking makeup, which included a touch of blush and a soft pink lip. The elegant entertainer wore her short blonde locks curled for an effortlessly chic look.

And it comes after the presenter, who farewelled her beloved husband John earlier this year, sat down with talk show legend Sir Michael Parkinson for an emotional chat. The English broadcaster, who attended their star-studded wedding at the Sydney Opera House in 1984, caught up with the TV star at his home in London, ahead of his upcoming Aussie tour, as he opened up on his friendship with John.