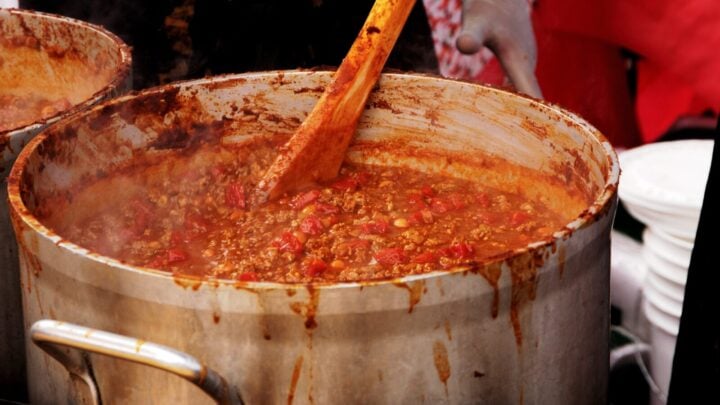 One of the funniest jokes we've ever heard at Starts at 60! Source: Getty Images

This is an oldie but still one of the best jokes we’ve ever heard at the Starts at 60 office. If you read it slowly and pay attention to the reactions of the first two judges, the response of the third judge is even funnier. The notes are from an inexperienced chilli taster named Bruce, who was visiting Texas in the United States.

BRUCE: Recently I was honoured to be selected to be a judge at a chilli cook-off because no one else wanted to do it. Also, the original person called in sick at the last moment and I happened to be standing there at the judge’s table asking directions to the beer wagon when the call came. I was assured by the other two judges that the chilli wouldn’t be all that spicy, and they told me I could have free beer during the tasting, so I accepted this as being one of those burdens you endure when you’re an internet writer and are therefore known and adored by all. Here are the scorecards from the event:

JUDGE ONE: A little too heavy on tomato. Amusing kick.
JUDGE TWO: Nice, smooth tomato flavour. Very mild.
BRUCE: Holy smokes, what is this stuff? You could remove dried paint from your driveway with it! Took me two beers to put the flames out. Hope that’s the worst one. These people are crazy.

JUDGE ONE: Smokey (barbecue?) with a hint of pork. Slight jalapeno tang.
JUDGE TWO: Exciting barbecue flavour, needs more peppers to be taken seriously.
BRUCE: Keep this out of reach of children! I’m not sure what I am supposed to taste besides pain. I had to wave off two people who wanted to give me the Heimlich manoeuvre. Shoved my way to the front of the beer line. The barmaid looks like a professional wrestler after a bad night. She was so irritated over my gagging sounds that the snake tattoo under her eye started to twitch. She has arms like Popeye and a face like Winston Churchill. I will not pick a fight with her.

JUDGE ONE: Excellent firehouse chilli! Great kick. Needs more beans.
JUDGE TWO: A beanless chilli, a bit salty, good use of red peppers.
BRUCE: This has got to be a joke. Call the EPA, I’ve located a uranium spill! My nose feels like I have been sneezing Drano. Everyone knows the routine by now and got out of my way so I could make it to the beer wagon. Barmaid pounded me on the back; now my backbone is in the front part of my chest. She said her friends call her ‘Sally’. Probably behind her back they call her ‘Forklift’.

JUDGE ONE: Black bean chilli with almost no spice. Disappointing.
JUDGE TWO: A hint of lime in the black beans. Good side dish for fish or other mild foods, not much of a chilli.
BRUCE: I felt something scraping across my tongue but was unable to taste it. Sally was standing behind me with fresh refills so I wouldn’t have to dash over to see her. When she winked at me, her snake sort of coiled and uncoiled — it’s kinda cute.

JUDGE ONE: Meaty, strong chilli. Freshly ground cayenne peppers add considerable kick. Very impressive.
JUDGE TWO: Chilli using shredded beef; could use more tomato. Must admit the cayenne peppers make a strong statement.
BRUCE: My ears are ringing and I can no longer focus my eyes. I belched and four people in front of me needed paramedics. The contestant seemed hurt when I told her that her chilli had given me brain damage. Sally saved my tongue by pouring beer directly on it from a pitcher. Sort of irritates me that one of the other judges asked me to stop screaming.

JUDGE ONE: Thin yet bold vegetarian variety chilli. Good balance of spice and peppers.
JUDGE TWO: The best yet. Aggressive use of peppers, onions and garlic. Superb.
BRUCE: My intestines are now a straight pipe filled with gaseous flames. No one seems inclined to stand behind me except Sally. I asked if she wants to go dancing later.

JUDGE ONE: A mediocre chilli with too much reliance on canned peppers.
JUDGE TWO: Ho hum. Tastes as if the chef threw in canned chilli peppers at the last moment. I should note that I am a bit worried about Judge Number 3, he appears to be in a bit of distress.
BRUCE: You could put a hand grenade in my mouth and pull the pin and I wouldn’t feel it. I’ve lost the sight in one eye and the world sounds like it is made of rushing water. My clothes are covered with chilli, which slid unnoticed out of my mouth at some point. Good, at autopsy they’ll know what killed me. Go Sally, save yourself before it’s too late. Tell our children I’m sorry I was not there to conceive them. I’ve decided to stop breathing, it’s too painful and I’m not getting any oxygen anyway. If I need air, I’ll just let it in through the hole in my stomach. Call the X-Files people and tell them I’ve found a super nova on my tongue.

JUDGE ONE: This final entry is a good, balanced chilli, neither mild nor hot. Sorry to see that most of it was lost when Judge Number 3 fell and pulled the chilli pot on top of himself.
JUDGE TWO: A perfect ending, this is a nice chilli, safe for all, not too bold, but spicy enough to declare its existence.
BRUCE: Mamma?