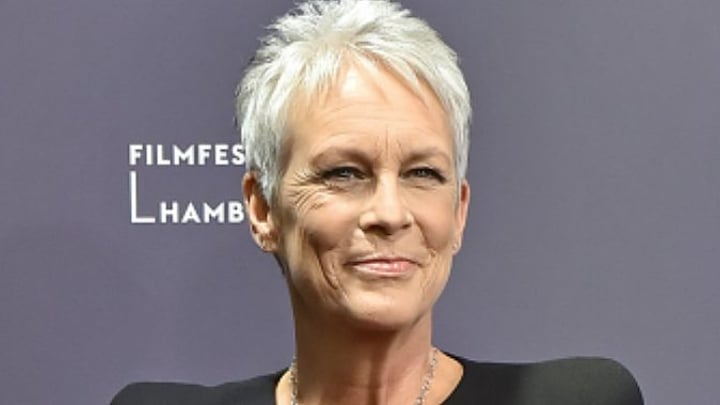 One fashion statement that will never date? An elegant little black dress, which is precisely what actress Jamie Lee Curtis slipped on for the premiere of her new film, Halloween, in Germany on Tuesday.

The Trading Places actress, 59, looked spectacular in the simple yet elegant black dress, showing off her slim figure, which featured 1980s-inspired shoulder pads.

Curtis – the daughter of Hollywood golden couple, Tony Curtis and Janet Leigh – showed off her edgy style with a pair of statement black boots and matching tights, as she accessorised with a simple silver pendant necklace.

She wore her short white locks in her signature cropped style, despite her character in Halloween – which is due for release just in time for the scary holiday on October 18 – sporting shoulder length hair. The award-winning actress kept her makeup to a minimum opting for gloss and light blush.

Curtis will reprise her famous role as Laurie Strode in the 11th Halloween film, set for release this month. She initially starred as Strode in the original instalment back in 1978, as well as the follow up in 1981. Halloween was her first ever movie. Since then, she’s added a few more to the list, many of them horrors, with The Fog, and Prom Night just to name a few.

The actress recently revealed to Entertainment Weekly she was very emotional during filming, telling the publication: “I started crying the day I arrived.

“I didn’t stop crying until the day I left. I didn’t expect it. I knew [Laurie] would be fierce, I knew she’d be galvanised, I knew I’d be tired, I knew I would work hard. I did not know that it would move me so deeply, the whole experience of the movie. It took me a good month [to recover],” she wrote.

It’s been a busy few months for the actress, who was spotted in a fitted white dress as she attended the Toronto International Film Festival last month to promote the popular franchise.

Are you a fan of Jamie Lee Curtis? Will you be watching the new Halloween film?