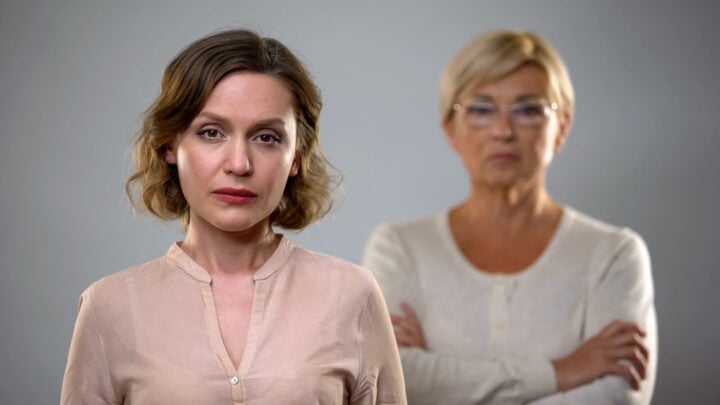 Remember that by creating more conflict, you will most likely be hurting your own son or daughter. Source: Getty

Married women and their mothers-in-law (MIL). It’s a relationship that’s potentially littered with landmines. But trouble is a two-way street, with many MILs of a certain age struggling to cope, it seems, with difficult and demanding daughters-in-law (DIL).

Internet forum Gransnet has wheeled out some of its sagest advice to grans all around the world about how to rein in their high-maintenance or just plain unreasonable daughter-in-laws.

For years, frustrated mothers-in-laws have been taking to Gransnet to ask for advice and vent their frustrations. Some of the threads hark all the way back to 2016. A thread titled, ‘Controlling DIL – how to protect DS’ posted by Gransnet user, ‘Aquafish,’ explains how her DIL is controlling her son (DS).

Aquafish wrote, “My DS & DIL have been married for three years and we’ve been blessed with a beautiful baby grandson. My son is a gentle soul like his dad and does anything for a quiet life, but I can see DIL taking things way too far.”

“She is a very strong character with OCD traits, is highly organised, and totally controlling, which I originally thought was what my DS needed in a wife. However, this is now becoming a constant pick, even in front of his close family and I’m finding it so hard to watch. I’m close to saying something to her but daren’t risk incurring her wrath … How do I support DS without risking losing contact with them? Thanks.”

Another user from a separate Gransnet forum in 2018 faced similar challenges with their DIL.

Gransnet user, ‘Gigi27’ explained that she was dealing with a hurtful DIL, when she wrote: “[When our DIL] gave birth, she told us that only her family would be allowed to see the baby … We were very hurt by this but understand that girls gravitate to their own families, so we let it go. We went up to see the baby on the second day, only to be confronted by some dreadful relative asking us ‘who the hell are you visiting my niece.'”

Megan Luscombe, Hello Tiger Relationship Expert, and qualified life coach explained, “Society (and patriarchy if I’m being brutally honest) has placed expectations on mothers to do the emotional and physical load for their sons throughout infancy to adulthood (when they shouldn’t) so when another woman steps in, it can cause unnecessary conflict and (for the mother-in-law, particularly) emotional distress.”

“This occurs due to a lack of boundaries between the mother and son, which then causes tension in the relationship of the new son and wife. However, due to this whole set-up it can then place a new burden on the wife to ‘replace’ the role that was originally being taken by the mother, hence conflict arising.”

Luscombe suggests a similar approach, recommending boundaries are established between a mother and their daughter-in-law.

“To navigate this relationship means recognising that there are things that you will be unable to change, the first being your mother-in-law’s nature. The second part is implementing boundaries to ensure you aren’t becoming your husband’s mother (boundaries, separation of emotional/physical tasks at home etc),” she said.

If you still find yourself not getting along with your DIL, you should do is keep conversations civil and brief. Try not to add fuel to the fire or burn bridges. Remember that by creating more conflict, you will most likely be hurting your own son or daughter.

Have you had an issue with your daughter-in-law? How did you overcome it?