Every dog has its day…spa 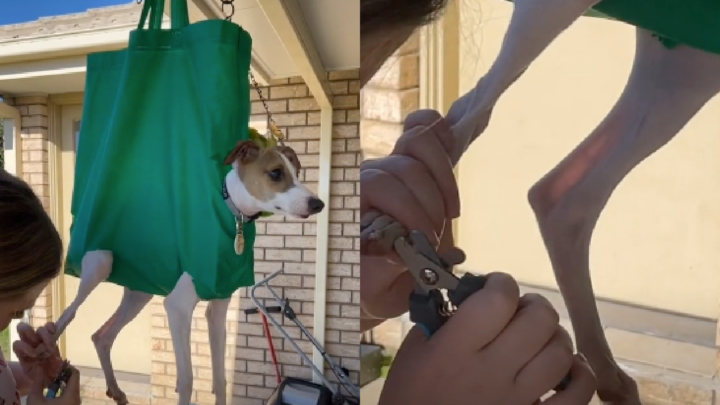 This is one way to get your dog to sit still while you cut their nails. Source: iggyhoney/TikTok

A Queensland dog owner has devised an ingenious way to cut the nails of their Italian greyhound.

And judging from the reaction on TikTok, more than 20,000 viewers like this particular and peculiar approach to hound hygiene.

Luke Young and his partner Ashleigh have posted a video of Honey, their greyhound, in which she is hanging comfortably in an eco-friendly shopping bag, from a hook suspended on the patio.

According to the Daily Mail report, the owners have cut strategic holes for Honey’s legs and head, to ensure ultimate comfort during her doggy day spa session.

And the simple solution appears to have worked.

The video has attracted more than 400,000 views and 600 comments from fellow dog owners with, apparently similar canine challenges, such as:

“My dog sounds like she’s getting murdered when we do hers.”

“Does this still work for absolute psycho dogs?”

“Omg, I’ve never been able to clip my dog’s claws. I tried getting a jumper on him once, a bag no chance.”

The Italian greyhound was a popular companion of noblewomen in the Middle Ages, particularly in Italy, so it’s little wonder Honey has taken to her new beauty regime with gusto.

But they are renowned for their speed, endurance and determination in small game hunting making dogs such as Honey unlikely to sit still for long, particularly when it comes to the finer details such as grooming.

“She would pull her legs away and try and escape my hold. It was very difficult to cut her nails without holding her down,” Luke has told the Daily Mail.

“As you can see in the video, she wasn’t fussed at all, she was really content just hanging there, she did not move or try and pull her legs away.

“We did not notice any signs of discomfort during the process or we would have immediately taken her out.

“We love our animals and would never do anything that makes them uncomfortable.”

Old-school celebrities have long held a special place in their hearts for dogs with the likes of Marilyn Monroe owning a basset hound; Lauren Bacall a beagle; Audrey Hepburn a Yorkshire terrier; Joan Crawford a dachshund; Gracey Kelly a poodle, Clark Gable an Irish setter; and Jayne Mansfield a bulldog.

American actress Sigourney Weaver, 71, owns an Italian greyhound but has yet to be spotted trimming her dog Bacci’s nails while it hangs from a grocery bag in her New York home.

Meanwhile, while the slew of TikTok viewers appear to have adopted a special kind of puppy love for this unconventional method, many agree it only works on smaller dogs, with one woman asking in jest: “Do you think my labrador would fit in a Woolies bag?”

What tips do you have when it comes to grooming energetic animals?