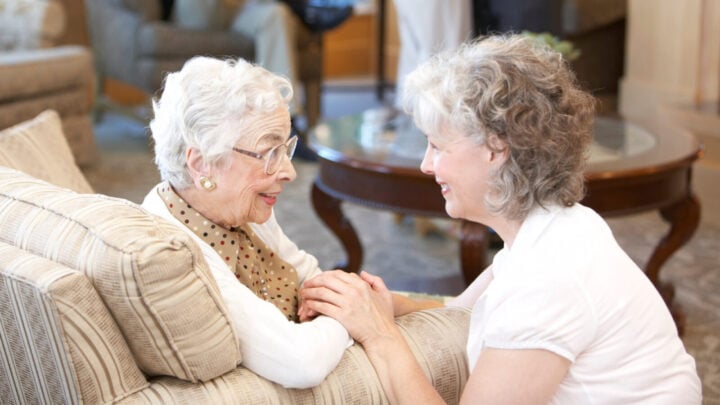 Interacting regularly with other humans, even in the simplest ways, such as through a quick chat, helps keep us socially connected and, in turn, mentally and physically healthier.

When we talk about preventative measures we can take to remain as healthy as possible as we age, we tend to think about diet, exercise and giving up the bad habits. It seems like we’re being told daily about things that are killing us – and those can range from smoking to sleeping with your mobile phone nearby, depending on what you happen to be reading that day.

What we don’t tend to think about is other people, or more specifically, how our interactions with those around us can impact our health in later life. Yet there’s been ample research published over a reasonably long period that shows maintaining social connections can have a positive effect on both our mental and physical health, while loneliness can do the opposite.

(Of course, social isolation and loneliness aren’t the same thing – you might be socially isolated but perfectly content with your own company, whilst another person might have social connections but feel lonely due to, say, a lack of a close companion.)

In fact, research from 2015 reviewing separate studies published over the previous 34 years found that social isolation and loneliness posed as big a risk for premature death as obesity. That makes being a couch potato doubly dangerous! On the flipside, further research found that simply having a close friend or loved one reduced mortality risk by 25 per cent in elderly people.

Unfortunately, getting older often goes hand-in-hand with life changes that make it harder to maintain social connections and easier to be lonely. Spouses, siblings and close friends pass away, adult children move, grandchildren grow up and seemingly all of a sudden, fewer people are coming round the house than previously.

Decreased mobility is also a common cause of both social isolation and loneliness. It can mean even a quick walk to the local shops for chats with the familiar faces behind the counters is no longer possible. Just going outside the house to do the garden and talk over the fence with the neighbours might become a thing of the past.

Other research demonstrates that having a fall – one of the causes of decreased mobility and the most common cause of injuries in older people – may be a major contributor to social isolation and loneliness. This is most likely because worries about having another fall stops people maintaining those connections with their community, whether it be the trip to the shops, the library or a walk around their suburb. Repeated falls are connected with feelings of losing touch even with friends.

You might have seen such a pattern with your own mother, father or older relative. A fall, loss of confidence, reluctance to go out, feelings of isolation; these things can turn into a spiral that’s hard to break and is really painful to watch in someone you love. Particularly when you know they’re not just feeling very alone no matter how often you make visits; they’re also missing out on the well-documented physical and mental benefits of keeping up social connections mentioned earlier.

And on a more basic level, they’re missing the fun and laughs they used to get out of simply interacting with other people.

That’s why I was interested in the work Starts at 60 has been doing with Tunstall Healthcare, one of the world’s leading providers of connected care solutions. Tunstall has spent the past 61 years’ developing technology that meets healthcare needs and one of its most clever innovations is the Tunstall GO. The GO allows people who are nervous about their mobility to leave their homes, confident help is at hand, should anything happen.

The Tunstall GO is worn as a pendant, attached to a belt or keyring or just kept in a pocket, so it isn’t onerous to carry around. But it tracks the wearer using a GPS system and a sensitive algorithm to ensure it can identify a location with amazing accuracy. And it gives the wearer access to a help button and hands-free speakerphone that can be used to summon assistance if needed.

How does that work? The help button and speakerphone connect to Tunstall’s 24-hour Customer Care Centres in Australia and New Zealand, where the experienced care consultants will triage the situation and either summon emergency services to the wearer’s location or alert their nominated contact to attend instead.

The Tunstall GO also has an optional fall-detection system that can alert the response centre if the wearer has fallen, even if the wearer isn’t able to summon help themselves by using the help button or speakerphone.

It really is a smart device – it’s water-resistant, charges wirelessly and works on the 3G network like a smartphone, with ‘lost’ and ‘flight’ modes like a smartphone too. And I can see how it could provide someone with the confidence boost necessary to return to normal activity after having their confidence affected by a fall.

Obviously, the Tunstall GO works in the home too, so can provide peace of mind if you’re worried about your parents having some kind of mishap in the house and not being able to contact you.

On that topic, Tunstall has plenty of other assistance and monitoring products for use at home. The SmartLink Medi Guardian MKII 4G, for example, is an at-home device with a companion pendant that allows the user to summon assistance 24/7 from anywhere in the home or garden. You can have extra fixed or portable pendants placed around the house to ensure one’s always close by, and the Medi Guardian also has an optional fall detection pendant if required.

(Intelligent fall detection devices use technology that senses if the wearer has fallen but, just in case of a false alarm, the user can cancel the call for assistance with the press of a button.)

And ongoing monitoring is available to Starts at 60 members for less than $20 a month, a discount of more than 30 per cent.

So, if you’re worried about someone you love becoming isolated from their local network just because they’re less confident about leaving their home, and you want them to get the benefits of staying social as they get older, I’d recommend having a look at the Tunstall GO.

Let Tunstall do the worrying, so you don’t have to.

Do you have an older loved one that you worry is feeling isolated?