Reducing your risk of gout 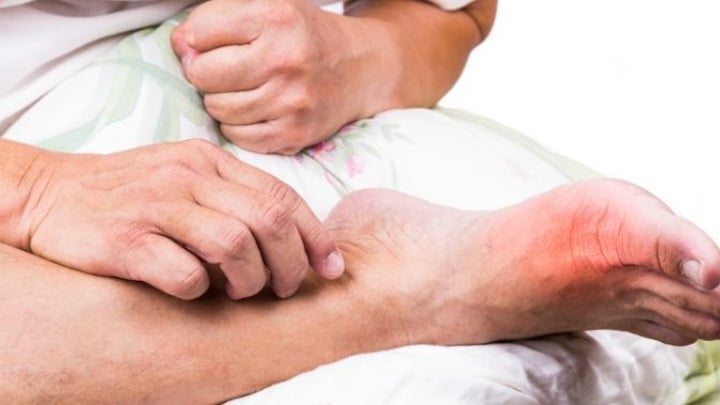 Gout can be incredibly painful and debilitating.

There are many different types of arthritis out there, but one of the most painful is gout. Unfortunately, gout is quite common among over 60s with around 70,000 Australians suffering from the condition.

While men are more likely to develop gout, it also affects women – especially those who have been through menopause.

Gout is caused by uric acid, which is usually discarded from the body by the kidneys. If the acid is not removed it can cause a build up and form small crystals around the joints, causing inflammation, pain and swelling.

Those who suffer from gout will often have visibly swollen joints that can cause hands and feet to contort and change shape.

Professor of Clinical Pharmacology at St Vincent’s Hospital Clinical School and Pharmacology, School of Medical Sciences, Faculty of Medicine, UNSW Ric Day says both diet, genetics and conditions like chronic kidney disease or chronic renal failure play a part in your risk of getting gout.

“Gout is very strongly linked to the uric acid concentration in the blood and that is generally controlled by genetics, but it’s also contributed to by your lifestyle, the big one being what you eat,” he said.

When it comes to diet, it’s foods that are high in purine that cause the most damage.

“If you’re eating a lot of foods that actually break down into uric acid, you’re more at risk. Typically shell fish like prawns, lobsters, calamari and octopus – and probably the highest risk seafood is something called whitebait – are very high in purine content which leads onto uric acid in the blood,” he said.

“The other one is alcohol and typically beer. But a lot of people think having gout is linked to having too much alcohol, but that’s not always the case. So a lot of people are embarrassed by having a diagnosis of gout because of that, but it’s not true.

“For example women after menopause become more susceptible to gout, not because they’re drinking more, but simply because of the menopause and the particular effect of estrogen.”

What is a gout attack?

One of the most painful aspects of gout is a ‘gout attack’, where joints become swollen and inflamed for up to 10 days, causing severe pain. Attacks often occur in the joint of the big toe and can last for hours, leaving the victim in debilitating pain.

“Often a gout attack happens in men and it’s usually in the feet at the base of the big toe and more commonly at night. It’s incredibly painful with pressure on the joint from even a bed sheet described as being uncomfortable,” he said.

“The first approach to dealing with this is medicine. There’s anti-inflammatory drugs, like nurofen, that can help. Taking a very solid dose for about a week or so until things settle is usually what happens.

How do I reduce my risk of gout?

While anyone can be affected by gout, there are a ways to reduce you risk, both medically and naturally.

Your doctor can check your uric acid levels with a simple blood test and if your levels are too high, medication can be prescribed to bring them back to normal. However, lifestyle changes will be the first port of call.

Diet plays a big part and doctors recommend reducing the amount of purine-rich foods you consume.

If you can lower your uric acid levels, your more likely to avoid gout in future.

Have you had any experience with gout? Do you have a form of arthritis?