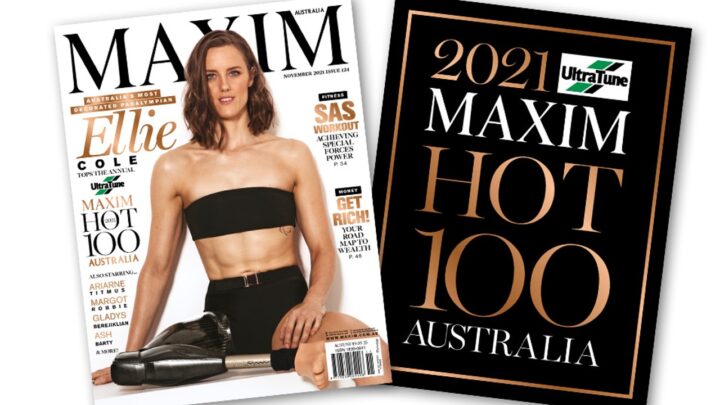 Racy Maxim magazine has released its annual Hot 100 List and there are a few surprises this year.

Keeping company with this year’s winner and their November cover star – celebrated amputee swimmer Ellie Cole – are a refreshing number of more mature and multi-faceted Aussie faces: such as 54-year-old best-selling Big Little Lies author Liane Moriarty (at number 92) and ABC anchor Leigh Sales in 81st spot. Both women join the tally as part of Maxim’s bid to evolve its “attraction algorithm”.

And in a clear sign of where the public gaze has shifted this past pandemic-plagued year, former NSW premier Gladys Berejiklian came in at number 95 on the hot list, followed by her former health adviser Dr Kerry Chant at number 96. Meanwhile, Queensland Premier Annastacia Palaszczuk landed in 97th place. Even Jenny Morrison, the wife of our Prime Minister, clinched a mention in the final spot. All four women have spent much of 2021 under the full glare of the political spotlight.

Ranking among the predictable appearances by actresses Margot Robbie, Samara Weaving and last year’s winner Delta Goodrem (who has now slipped to number nine), there’s also a pleasing number of more mature Aussie showbiz beauties in the mix. These include television golden girl Sonia Kruger (age 58) in 74th position and Hollywood icon Cate Blanchett (age 52), who came in at number 48.

This year, Maxim has adjusted its “attraction algorithm” to embrace changing times, the men’s magazine’s flagship US title said. This has resulted in a more “woke” tally that spans a combination of brains, beauty, inspiration, influence and athleticism.

“We chose to re-evaluate our criteria for the dawn of a new era,” said Maxim. “While the list has previously consisted almost entirely of models, the balance of power has shifted. Physical beauty is still an important part of the equation, (but) our attraction algorithm takes many more factors into account.”

Maxim compiles their annual top 100 by trawling through reader’s feedback on social media and email, it said. It seems that our female Olympic heroes are still very much flavour of the month among the mostly-male Maxim Australia audience. Hot on the heels of winner Ellie Cole, who scooped 17 medals over four Paralympic games, is pool champ Ariarne Titmus after her record-smashing turn at the Tokyo Games. Both sporting stars beat out Margot Robbie, who is in third place this year. Fellow Hollywood-based Aussie actor Isla Fisher came in at number 59.

“[The list] continues to celebrate the outstanding females who, this year, have influenced, impressed or impacted us with their aptitude, intellect, humour, headlines, sexiness, and overall mega-talents,” she said.

Despite the more inclusive approach by Maxim, however, the Top 10 Maxim hotties for 2021 are all under 40 years of age:

What does the label “hot” mean in an older woman?