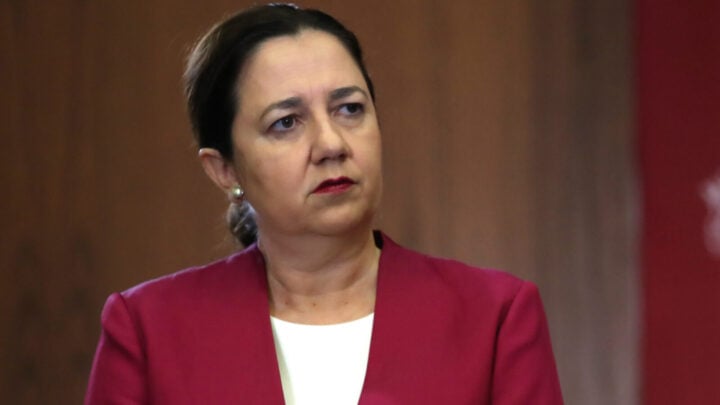 The premier has been hit with criticism from the prime minister in recent days. Source: Getty.

Queensland Premier Annastacia Palaszczuk told reporters she’s “human” too this morning, as she responded to growing criticism over her firm stance on the state’s border closures. It comes after a tough week for the state leader, who has copped flack from rival politicians, and even Prime Minister Scott Morrison, over her border measures.

Delivering her daily Covid-19 update in Brisbane this morning, Palaszczuk said she, like many Australians, had personally been impacted by “heartbreaking” border restrictions, which have kept many families apart. “I’m human just like everyone else,” she said on Friday.

“These issues hurt me deeply. They hurt me deeply because during this pandemic I have lost loved ones as well. I know exactly what people are going through.”

Palaszczuk’s comments come after the Queensland government sparked national outrage when Canberra nurse Sarah Caisip was forced to miss her father’s death and subsequent funeral because she had to remain in hotel quarantine, in line with Queensland’s current restrictions which identify the ACT as a Covid hot spot.

Caisip had pleaded to be granted an exemption to attend the funeral, which was not granted. However she was finally allowed to view her father’s body privately, but was made to wear full PPE and was accompanied by paramedics.

On Thursday, Queensland’s Chief Health Officer Dr Jeanette Young told reporters that the restrictions around funerals is one of the “hardest things” she has had to do throughout the pandemic, but insisted that the gatherings presented one of the “highest risks” for community transmission.

Palaszczuk was hit with a barrage of criticism from fellow politicians over the matter, including from Prime Minister Scott Morrison, who also issued a plea on Ms Caisip’s behalf this week. However, during Friday’s press conference, the premier stressed that the decision to refuse Caisip’s request had actually been made by Young, who was not present at the media briefing.

“Let me make it very clear: I don’t make those decisions,” the premier said. “I said to the Prime Minister I would refer it to the Chief Health Officer and I did that. It’s actually her decision – under the act, it’s her decision.”

Home Affairs Minister Peter Dutton also hit out at the premier during an interview on the Today show on Friday morning, in which he claimed the state’s border restrictions were “having a very negative impact on people’s mental health and it is really devastating families”.

“It is a problem of her making and it needs to be fixed sooner than later.”

Queensland recorded two new cases of Covid-19 on Friday, both of whom are in quarantine.

What are your thoughts on that story?