Aldi one of the worst supermarkets for unhealthy foods, study finds 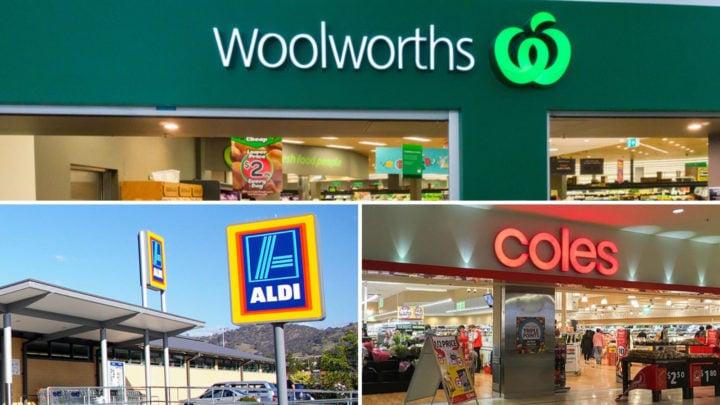 Australia's leading supermarkets were ranked for their healthiness as part of the new FoodSwitch: The State of the Food Supply report. Source: Getty/WikiCommons

While Australia’s major supermarkets save shoppers money with their affordable own-label products, new research shows some goods could be costing Aussies when it comes to their health.

The newly released ‘FoodSwitch: The State of the Food Supply’ report by The George Institute for Global Health and Global Obesity Centre at Deakin University analysed the healthiness of more than 32,000 packaged food items sold across the country’s leading supermarkets.

Using the government-developed health star rating (HSR) criteria, the healthiness of processed items from 25 different food manufacturers including Heinz, Nestle and Kellogg’s, as well as own-label items from Woolworths, Coles, Aldi and IGA were ranked. The major supermarkets’ own-brand items account for approximately 30 per cent of all products in stores.

The HRS system assesses the overall nutritional profile of packaged foods and assigns a rating between ½ star to five stars as a standard way of comparing similar packaged foods. Aldi had the highest proportion of discretionary, or ‘junk’, foods on shelves – making up 50 per cent of their entire range. Meanwhile, the report also shows that Aldi’s own-brand products were the most ultra-processed and included sugars, oils, fats, salts, antioxidants, stabilisers and preservatives that are processed to improve taste and shelf life.

However, Aldi’s own-label products weren’t the worst when it came to overall healthiness across the four major supermarkets. Woolworths topped the list as the healthiest with an average rating of 3.2, followed closely by Coles on 3.0. Aldi ranked third with 2.7, while IGA came in last with an average rating of 2.6. Just four in 10 of IGA’s own-brand products were considered healthy with a HSR of 3.5 or above.

A spokesperson for Metcash, which supports more than 1400 independently owned IGA stores, told Starts at 60 the report compares manufacturers – meaning the comparison between the supermarkets is only against their own brand products. They also explained that other factors “appear to have unfairly impacted the IGA ranking”, such as less own-brand products than other supermarkets, particularly in the fresh food department.

The spokesperson also said fresh items were included in the Community Co own-brand range in 2018, “which would have increased rather than reduced fresh own-brand products” between 2017 and 2018, as the report implied.

“We decided not to use the health star rating system for our own brand products as we believe that system has significant flaws. Instead, we use the Recommended Daily Intake (RDI) system as we believe it provides consumers with more detailed and useful information on nutrition,” the spokesperson said in a statement to Starts at 60. “More broadly, our Community Co range has a strong focus on healthy eating including ensuring products are responsibly sourced and do not include artificial colours, flavours or genetically modified ingredients.

“Further, it is important to note that local communities benefit from every sale of a community co product through donations to local programs and initiatives.”

The A2 Milk Company, Sanitarium and Nudie Foods were among the healthiest food brands in the country, with ratings of 4.2, 4.1 and 4.1 respectively. At the other end of the scale with just a rating of 1.2 were Bundaberg Drinks and Mondelez, which includes brands such as Cadbury, Oreo, BelVita and Philadelphia.

“We need the government to take real action and focus their efforts on helping manufacturers and retailers to make our foods healthier,” Professor Bruce Neal of The George Institute for Global Health said in a statement. “Getting healthier foods on the shelves will be key to curbing the epidemic of obesity and diet-related ill health blighting Australia.  Every day of inaction is putting the health of millions of Australians at risk.”

The report recommends health star ratings should be mandatory on all packaged food items sold in Australia and that food manufacturers, including supermarkets selling own-brand foods, should take responsibility for the healthiness of goods they are making and marketing. Retailers are also encouraged to set minimum requirements for the healthiness of foods they stock, merchandise and promote in stores.

“Food retailers have a huge number of products and the power to significantly impact on the healthiness of the food supply, as they are the gatekeepers to the majority of food and beverage purchases made in Australia,” study co-author Gary Sacks said in a statement. “This report shows clear opportunities for manufacturers and retailers to make significant improvements to the healthiness of the food supply.”

Are you surprised by the findings of the report? Do you always pick the healthier option at the checkout?