‘My dad was the Watermelon King of the Mallee’ 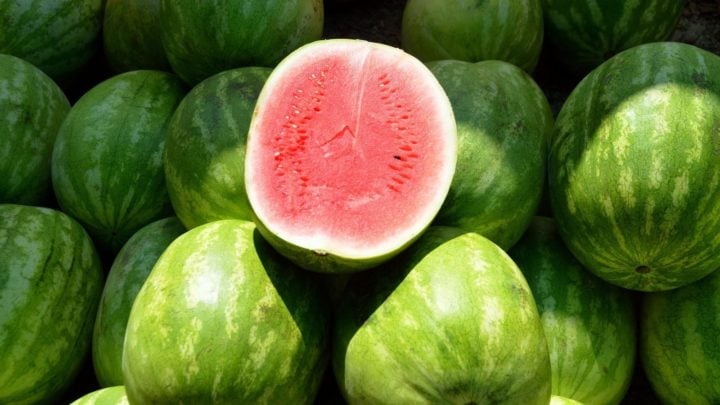 Jennifer's dad figured there was money to be made in melons, and boy was he right! Source: Pixabay

My dad was the Watermelon King of the Mallee in Victoria. Back in 1929, when the bottom fell out of the wheat, wool and dried fruit industry, Dad decided to give growing watermelons a go.

Dad lived with his parents and 10 siblings in a little Mallee town called Goodnight. Goodnight is nestled on the banks of the Murray River.

The years between 1927 and 1930 were very lean times for those on the land, although the country folk were still better off than their city cousins. Country folk could still grow a few vegetables and had access to the odd lamb or two.

I digress … Dad had noticed an old Spanish fellow who worked for his uncle was growing melons. He approached the Spaniard and asked for a few tips on growing these melons. As a result he was offered a partnership, 50-50 for the work and the profits.

It all sounded pretty good to Dad and as soon as the frosts had gone, the melons were planted, about 2 acres (0.8 hectares) of them. Dad supplied the land and water, courtesy of his father, and the other bloke did most of the weeding etc. as Dad still had wheat to plant and care for.

When harvest time came, a bounty of melons were picked. Dad could help his father out financially, which was great as the wheat harvest had brought very little profit.

The Spaniard used to also take the melons around to other little towns and convinced Dad to go hawking with him one day. It was the first and only time for Dad as the Spaniard was not the most honest of blokes. He would sell a shopkeeper some melons, and then as people came into the shop he would sell them melons off the truck. The results were a few very angry shopkeepers and Dad being extremely embarrassed about all of the dirty dealings.

Needless to say, Dad decided it would be better to go solo in the melon growing game. He realised there was money to be made. More money in fact than growing wheat.

The year was pretty good for both crops, but wheat prices were right down and there was way more money collected from the sale of the melons than the sale of the 5,000 bags of wheat.

The story of Dad’s melon success was broadcast in the United States. Such a good crop was produced on so little land. I still have the letter Dad received from the agriculturists in America who marvelled at his ingenuity.

That’s where the title Watermelon King eventuated. Dad held the title for many many years. The old folk around the district still talk about “the marvellous melons Tom used to grow”. I myself took up growing pumpkins and watermelons about 15 years ago, but that is another story for another time.

Do you like to grow fruit and vegetables? Were your family farmers? Do you have a tale like this from your family?