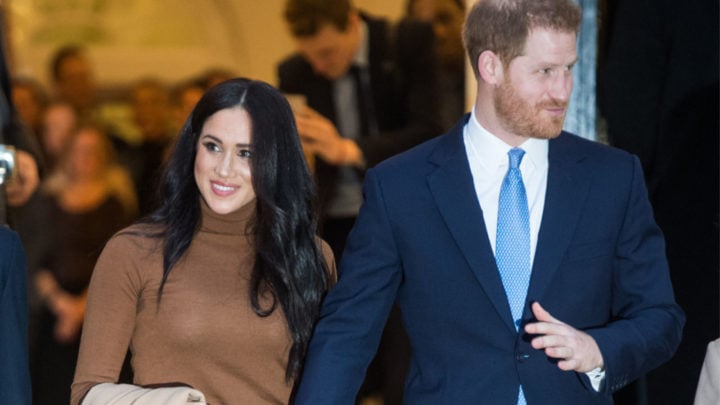 Harry and Meghan's exit from the royal family will come into effect on April 1. Source: Getty.

It has been just six weeks since the Duke and Duchess of Sussex shocked the world by revealing they intended to step down from their role as senior members of the royal family, but now the couple have just over a month to go before they are free to start their new life overseas.

Prince Harry and Meghan will be free of the royal family’s ties from April 1, according to widespread reports in the British media, with the couple set to carry out their final official engagements during a trip to the UK next month.

According to Hello! magazine, Harry and Meghan will no longer represent Her Majesty the Queen, either at home or overseas, after that date as they will no longer be classed as working members of the royal family.

Harry and Meghan are expected to return to the United Kingdom next week with the prince scheduled to attend the Invictus Games Choir Visit on 28 February alongside Jon Bon Jovi. Both the duke and duchess are then expected to make an appearance at the Endeavour Fund Awards on March 5, which recognises wounded, injured and sick service personnel and veterans who have used sport as part of their recovery.

Prince Harry is then due to attend the official opening of the Silverstone Experience on March 6, and the couple will attend the Mountbatten Music Festival at the Royal Albert Hall the following day, reports Hello! A spokesperson for the Sussexes also told the news outlet that Meghan will mark International Women’s Day on March 8 in some capacity.

The news comes after reports that the palace had banned the couple from using the word ‘royal’ in any of their branding, casting the future of their new Sussex Royal website, which they launched last month, into doubt.

Earlier this week, the Daily Mail reported that the Queen had decided it is no longer appropriate for the Sussexes to use the word royal to promote themselves, following their shock exit from the front line of the firm earlier this year. However Buckingham Palace has not yet confirmed the reports.

The alleged decision comes after Harry and Meghan splashed out on a brand new website which heavily features the Sussex Royal branding, including in the website address, and follows the aesthetic of their hugely popular Instagram page, which is where they plan to make major announcements going forward.

The couple also applied to globally trademark the term for use on products such as clothing and stationery, as well as campaigning and charitable fundraising.

Do you think Harry and Meghan have made the right decision for their family?