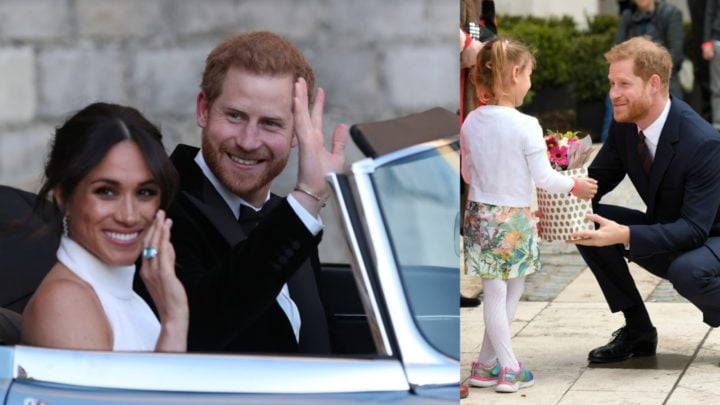 Prince Harry has shared his excitement ahead of the birth of his first child as he chatted to royal fans at a charity event – as it’s revealed he and his wife Meghan have now officially moved into their new home at Frogmore Cottage in Windsor.

The Duke of Sussex, 34, delighted four-year-old Sofia Zdenkowska as he bent down to greet her at the Lord Mayor’s Big Curry charity lunch on Thursday, before speaking to several fans in the crowd outside.

According to the Mail Online, he was asked by the wife of a servicemen if he was looking forward to the upcoming birth of his child, to which he reportedly replied: “Of course I am excited, very excited.”

It’s thought the couple wanted to ensure they were moved in before the birth of their baby – with the tranquil country setting offering Meghan a relaxing escape from the spotlight in the weeks before she gives birth.

Kensington Palace confirmed the royal couple would be officially leaving their recent residence of Nottingham Cottage in the palace at the end of last year.

Harry & Meghan are moving to #Windsor Confirmed by @KensingtonRoyal after story from @byEmilyAndrews pic.twitter.com/LDcEOEZr7t

“The Duke and Duchess of Sussex will move to Frogmore Cottage on the Windsor Estate early next year as they prepare for the arrival of their first child,” Kensington Palace confirmed in a statement shared on Twitter.

“Windsor is a very special place for Their Royal Highnesses and they are grateful that their official residence will be on the estate.

Read more: Prince Harry and Meghan set to move out of Kensington Palace next year

“The Duke and Duchess’s office will continue to be based at Kensington Palace.”

The move was delayed as the cottage underwent a large refurbishment to transform it from staff accommodation to a family home.

A source previously told The Sun that the couple had been very specific in what they wanted for their new home.

“It’s been all hands to the pump. The builders have worked all week whatever the weather. But they keep making changes, particularly on the layout,” the source said at the time.

The property has a special meaning to the soon to be parents as it is where they held their private wedding party and had their beautiful engagement photos taken.

Do you remember your excitement ahead of welcoming your first child?