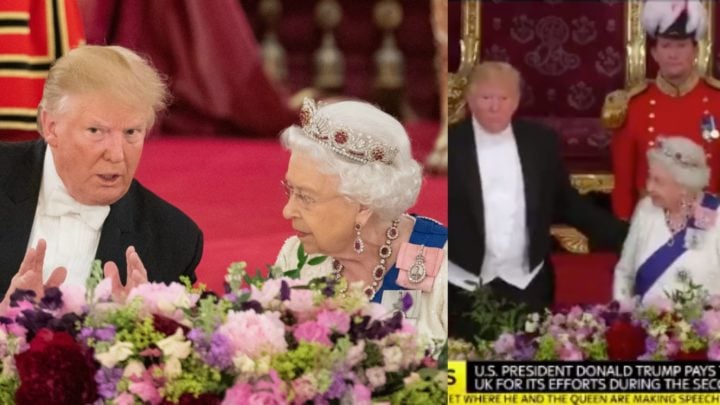 Donald Trump has come under fire for apparently touching the Queen on the back during a state dinner at Buckingham Palace. Source: Getty and Twitter/ Sky News

US President Donald Trump has landed himself in hot water after apparently breaking royal protocol during his most recent trip to the United Kingdom to meet with Her Majesty the Queen.

Royal fans went into meltdown after footage of the 72-year-old appeared to show Trump touching Queen Elizabeth II on the back while addressing the royal at a state banquet at Buckingham Palace on Monday.

It is a well known fact that in order to touch the Queen, she must first offer her hand and any other touch, even slight, is deemed a break in protocol.

While the video clip only shows the exchange from the front, fans are adamant the president went against the firm rules by placing his hand on the royal’s back.

"She has embodied the spirit of dignity, duty and patriotism that beats proudly in every British heart" – @realDonaldTrump makes a toast to the 'remarkable reign’ of the Queen.

“He absolutely touched the Queen,” one person wrote on Twitter.  While another simply wrote: “He touched her.”

However, others aren’t so convinced with some claiming he was simply helping her pull her chair back as she stood to speak following Trump’s address.

“I think he was helping pull back her chair,” someone added. While another said: “He helped move her chair. She graciously smiled to thank him.”

This isn’t the first time a country’s leader has been accused of breaking royal protocol in this manner though as, back in 1992, former Australian Prime Minister Paul Keating was branded the ‘Lizard of Oz’ by British media after he touched the monarch in public.

The then-leader of the Labor Party was filmed placing his arm around Her Majesty, guiding her along as he introduced her to guests in Australia’s capital of Canberra.

More recently, Michelle Obama sparked controversy after she also touched the Queen on the back during her first meeting with the royal in 2009. The two were deep in conversation at Buckingham Palace when Obama reached out and put her arm around the royal without even thinking twice.

Barack Obama’s wife has since spoken out about the incident in her memoir Becoming, explaining it was a normal human interaction.

“I did what’s instinctive to me any time I feel connected to a new person, which is to express my feeling outwardly,” she wrote according to The Telegraph.

“I laid a hand affectionately across her shoulder.”

Read more: Melania and Catherine are ethereal in white as they step out for state banquet

She added: “If I hadn’t done the proper thing at Buckingham Palace, I had at least done the human thing.”