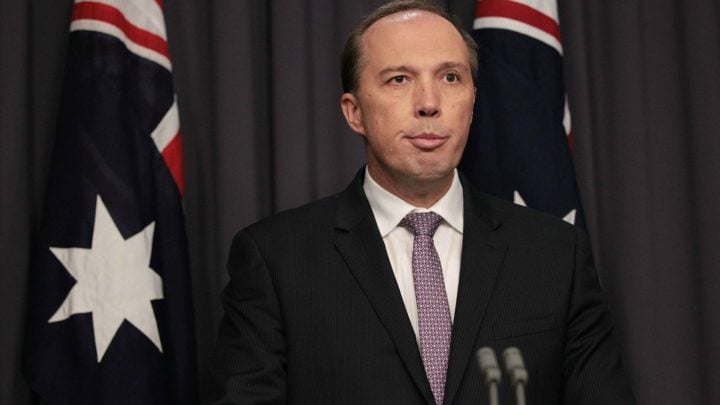 The Home Affairs Minister was diagnosed on Friday. Source: Getty.

Peter Dutton confirmed that he has been diagnosed with coronavirus on Friday afternoon, after waking up with a temperature and sore throat this morning.

The home affairs minister released a statement on Friday afternoon and confirmed that he had been admitted to hospital, but insisted that he “feels fine”.

“This morning I woke up with a temperature and sore throat,” Dutton said. “I immediately contacted the Queensland Department of Health and was subsequently tested for COVID-19.

“I feel fine and will provide an update in due course.”

Many people sent well wishes to the minister on social media, with one person writing: “Best of luck Peter, see you back on the Job soon.”

Another said: “Oh my God! Hope you recover soon!” While another wrote: “Wishing you speedy recovery. We cant afford to have you off work.”

The news comes after Prime Minister Scott Morrison announced that the government was advising that all public gatherings of 500 people or more across the country should be cancelled as of Monday, as the number of confirmed cases of COVID-19 continues to rise across Australia and around the world.

“Australia right now is in a position where we have low rates of this virus, but we have always known that the number of cases will rise,” Morrison said today during a COAG meeting in Sydney. “In relation to that, based on advice we have received today, it has been recommended to us that we move to a position by Monday where we will be advising against organised non-essential gatherings of persons of 500 people or greater.”

Morrison went on to clarify that the measures do not include schools, universities, public transport or areas such as airports and said that people should see this as a common sense precaution. While the PM also acknowledged that there would be more issues to work through and confirm before the advice kicks in on Monday.

The prime minister also explained that, in collaboration with DFAT, the government is now advising all Australians to reconsider their need to travel overseas, regardless of age or health status, if travel is not essential. He said: “We are effectively putting in place what is called a level three travel advice for travel of Australians overseas. This is done to protect their health and to limit their exposure, given we have so many countries now that are affected by the coronavirus.”

Have you been affected by coronavirus?