‘I failed’: Heartbroken father of boy killed in tragic truck accident speaks out 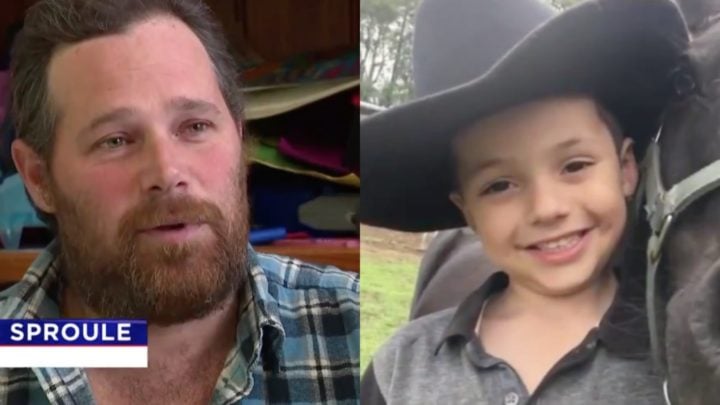 Doug Sproule, the father of little Harry who was killed in a tragic truck accident, has spoken out for the first time. Source: Twitter/ 7 News Sydney

The heartbroken father of a five-year-old boy who was killed in a tragic truck accident in Sydney on Friday has spoken out for the first time about what was undoubtably the worst day of his life and how he blames himself for the death of his youngest child.

Harrison Sproule was killed when he was accidentally struck by his father’s truck while he was parking it for the day in a yard in Picton in Sydney’s south-west. Emergency services were quickly called to the scene and Harry, as he’s known by his loved ones, was treated by NSW Ambulance paramedics before being taken to Liverpool Hospital. The little boy tragically didn’t pull through and died at the hospital.

Now, just days after losing his son in the most tragic of circumstances, dad Doug Sproule has opened up about the heartbreaking death of Harry, who he described as a “very happy and mischievous” little boy.

Picton: A father is tonight trying to forgive himself and incredibly, speaking out about what's undoubtedly been the worst day of his life. Doug Sproule was parking his truck for the night with no idea his 5yo son Harrison was behind him. The impact was fatal. @PeterFegan7 #7NEWS pic.twitter.com/TaHJ0MXH3I

“He was very outdoors, he loved his horse, loved his brother and sister,” the heartbroken father told 7 News. “He used to come with me a lot in the truck, he loved it.”

Harry had a bright future, he started school this year and his dad said he “absolutely loved it”. But sadly, his life was cut short, and Doug has blamed himself. The father told 7 News he failed as a parent and is deeply sorry that he couldn’t protect his son. But, his other children are forgiving and are not placing blame on their dad.

“Sorry, that’s all I can say,” Doug said. To which his son Max responded: “You don’t have to be sorry, it was an accident.”

However, despite the support of his family Doug said he failed in his job as a dad and should have been their to protect Harry.

“I fix problems every day but I couldn’t fix this one,” he told 7 News. “It’s my job to protect him, and I failed on this one. He will be sadly missed, he will be deeply, sadly missed.” Doug’s daughter Claire added: “He was special, you don’t find a kid like that.”

Since Harry’s tragic passing the community and even strangers have rallied behind the family in a bid to support them through this difficult time. Many have taken to social media to send their condolences and best wishes going forward.

“Such a terrible tragedy. Condolences to the family,” @catiger1 wrote on Twitter. “Tragic accident, what a beautiful family, hope they can heal in time,”@jojoeyjo9 said. While @MrCMittagSchool added: “May God comfort you despair. Horrifying. May Harrison live in your hearts until you meet him in paradise.”