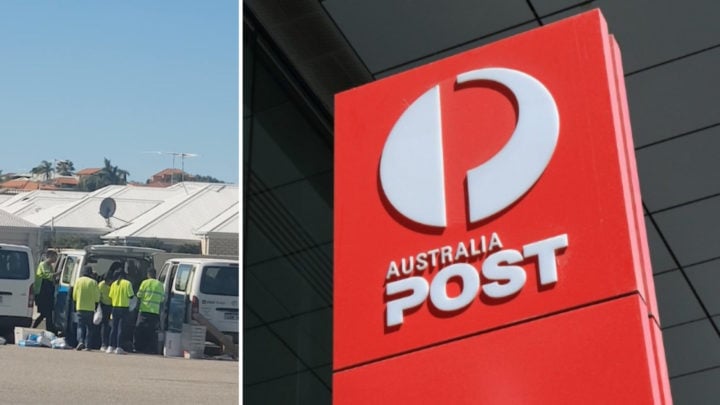 In what has been described as locals as "disgusting", video appears to show Australia Post workers recklessly throwing parcels around in the carpark of a McDonald's restaurant. Source: Facebook.com/michelle.shoosmith and Shutterstock

When people send parcels in the mail, the last thing they expect is for their items to be thrown around or handled without care. But a new video has now been shared online appearing to show couriers doing just that.

“We just witnessed this in Currambine. Ever wonder why your parcels arrive damaged or broken watch this,” Shoosmith wrote. “Spread it far and wide. I am disgusted.”

Video footage appeared to capture workers throwing parcels on the ground without care. Shoosmith added that the incident took place in the car park of a McDonald’s restaurant and not inside a sorting facility. In another photo, a series of Star Track trucks appeared to be lined up in the car park of Ellenbrook Shopping Centre sorting through more parcels.

“Seems to be a widespread issue,” she added and claimed she had messages from people all across Australia telling her they’d seen this happen in cark parks, football ovals and outside fast food restaurants regularly.

The video was originally uploaded to Facebook on Tuesday and has been viewed more than 561,000 times. It’s also been shared 11,000 times across social media and attracted a negative reaction from the community.

One person said: “This is a shame, as I’ve always found these couriers very good. I guess they do need a place to sort parcels for delivery, and a car park is obviously a convenient spot, but their handling leaves a lot to be desired.”

Another comment read: “I’m so glad you’ve done this Michelle, people need to be accountable for their actions! And a massive THANK YOU From all online shoppers.”

“Our customers deserve better and we apologise,” an Australia Post spokesperson told Starts at 60. “The matter is being investigated.”

It’s not the first time Australia Post has made headlines for deliveries. CCTV footage last year captured the hilarious moment a delivery gone wrong was caught on camera.

Dubbo local Geoff Crowe took to the Australia Post Complaints Facebook page earlier with the footage, asking Australia Post to “please explain” what he was seeing.

A woman believed to be from Australia Post could be seen walking up a driveway, presumably to deliver something, before making her way back to her vehicle. She got back into the car and attempted to drive out of the cul-de-sac, before bumping into a trailer parked close by.

As the woman attempted to turn away, the van knocked the trailer – which was then seen moving and curving its way around the cul-de-sac, as the woman got out of her van in a frantic attempt to stop it from rolling down the hill.

Do you do your shopping online? Has an item ever been delivered broken?