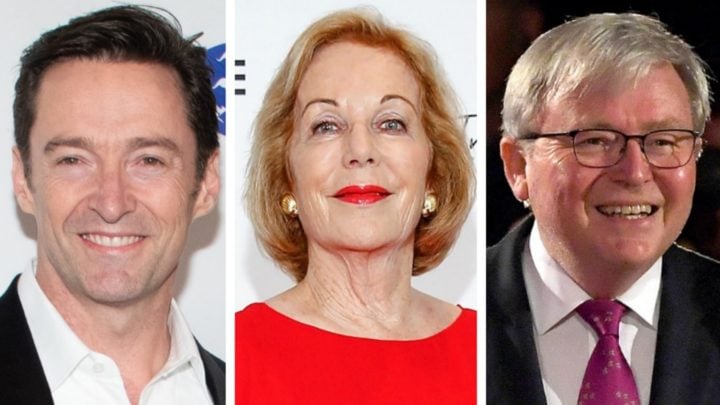 Hugh Jackman, Ita Buttrose and Kevin Rudd will all be recognised with awards. Source: Getty.

A host of top Aussie stars and inspirational figures have been recognised in the 2019 Queen’s Birthday Honours list, with actors, TV stars, politicians, journalists, lawyers, community figures and more leading the charge.

Everyone from actors Hugh Jackman and Sigrid Thornton to TV star and ABC Chair Ita Buttrose, former PM Kevin Rudd and domestic violence campaigner Rosie Batty topped the list this year thanks to their contributions to the community.

Rudd, 61, took the opportunity to dedicate his Order of Australia honour to “our Indigenous brothers and sisters” in a lengthy statement, while thanking his wife and children for their ongoing support.

“I am grateful to my life-long partner Therese for being with me throughout this journey, together with our three extraordinary children Jessica, Nicholas and Marcus and their families,” he said.

Statement on being awarded an AC on the Queen’s Birthday honours list. pic.twitter.com/ixvGSYWtkk

“Together they have been a source of constant love, friendship and support throughout. I accept this award on their behalf because without my family, I would be nothing.”

He added: “I dedicate this award our Indigenous brothers and sisters. These first Australians are the oldest continuing civilisations on earth, and for those of us who have arrived in recent centuries, it is a privilege to share this vast and ancient continent with them.”

Rudd previously rejected the award while he was serving as prime minister, saying at the time that the PM needs no further reward while in office.

He has now been recognised for his service to the Australia Parliament, Indigenous reconciliation, economic initiatives, policy reform and his roles as senior advisor to international organisations.

Meanwhile, Jackman, 50, was honoured with a Companion of the Order – the highest of four levels of the Order of Australia – for his contributions to the performing arts and the global community.

I am a proud Australian. pic.twitter.com/0Wnvi4VEx6

“As the youngest son of parents who made the decision to immigrate to Australia the year before I was born, this honour is especially emotional and humbling to me,” he said in a video message on Twitter.

“The countless teachers, mentors, institutions who have supported me along the way are immeasurable, and I will always be in my country’s debt.”

Meanwhile, while Ita Buttrose has already received an Order of Australia honour, she has now become a Companion of the Order thanks to her service to the community through leadership in the media, the arts, the health sector and as a role model.

Joining them are actors Eric Bana and Sigrid Thornton, who have been appointed a Member and an Officer of the Order of Australia respectively.

This year women make up 40 per cent of recipients across all tiers of the awards and also include former union boss Sharan Burrow and domestic violence campaigner Rosie Batty.

Batty took up her fight against domestic violence after her abusive husband killed her son Luke in a public park previously. She has been campaigning to raise awareness of the tragic impacts of it ever since.

Elsewhere, journalists Jane Caro and Leigh Sales will become a Member of the Order of Australia (AM), as well as singer Guy Sebastian.

Creators of fashion label sass & bide, Sarah-Jane Clarke and Heidi Middleton, will join them with AM in their names, as well as News Corp group executive and AAP chairman Campbell Reid and rugby stars Johnathan Thurston and Cameron Smith.

And Melbourne lawyer Richard Leder, who represented Rebel Wilson in her high-profile media defamation case, was awarded a medal in the Order of Australia for his charity work.

“We would all welcome higher recognition of magnificent Australian women,” he said, according to news.com.au.

“These awards are our opportunity to say to fellow Australians, ‘thank you – without you and your tireless service we wouldn’t be the community or nation that we are’.

“Some names on today’s list are well known. Many more are known only to those they help and serve day-in-day-out. They are all wonderful people and are all worthy of recognition and celebration.”

What do you think of this year’s honours list?